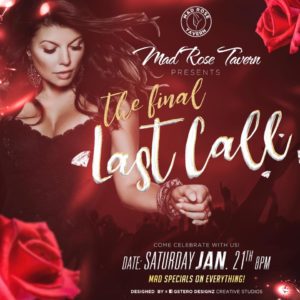 The Clarendon bar and restaurant did not look like it was going to survive long after it opened in 2011 and within weeks underwent a management change and, later, a menu change.

However, survive it did, as it focused more on nightlife and events. One memorable moment: bringing in Sisqo of “Thong Song” fame to perform in 2013.

Now, Mad Rose is closing after a final blowout party starting at 8 p.m. on Saturday. (It’s also scheduled to host a Democratic brunch on Sunday.)

Replacing Mad Rose will be a new Asian restaurant called Bao Bar, which will specialize in Taiwanese street food. As reported by the Washington City Paper, restaurant owner Social Restaurant Group, which just opened Pamplona restaurant across the plaza from Mad Rose, is planning a “major renovation” of the space but is hoping to open Bao Bar as early as March.

Read more →
More Stories
Morning Poll: Are You Going to Any Inaugural Weekend Events?Seventeen Predictions for Arlington in 2017