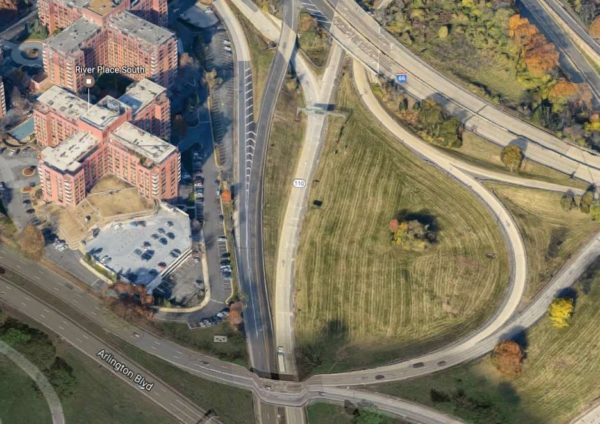 A local developer is proposing to build a 325-foot Space Needle-like tourist destination, dubbed the Spirit of America Tower, in Rosslyn.

The tower would be built on VDOT land alongside Route 110, near the junction with I-66, and would be designed to be a first stop for visitors to the nation’s capital, according to developer James H. Burch.

From a description of the project:

The Spirit of America Tower is going to be an interactive, introductory museum about Washington, D.C. and the founding principals of our country. People come to Washington, D.C. and rarely get an introduction to the whole city; rather, they see it piece-meal. The Spirit of America Tower will not only give that introduction to the city and its founding principles, but also take note of the fact that every individual has a unique talent or gift, and that this country was founded so that they could fulfill their dream. This monument will be one in which they see the radical beauty in those plans and that they have the opportunity to live up to the founders’ hopes for America.

Burch was a former owner of the land on which National Harbor now sits; he sold it after proposing a mixed-use townhouse-and-office project called the “Bay of America.” Burch also recently bid, unsuccessfully, on the redevelopment of the World Trade Center in New Orleans.

The Spirit of America Tower, Burch says, will feature a modern design — “lofty yet very real, and a visceral experience” — from the firm behind the One World Observatory on the top of One World Trade Center in New York City. Early concept sketches show at least three levels on the tower: an observation deck, a landing deck and an event facility deck.

“It will be designed by the best visionary firms available… with interactive depictions of historic events, and then guides/storytellers who tell the stories of Washington, D.C.,” Burch told ARLnow.com. “It is also a spectacular view.” 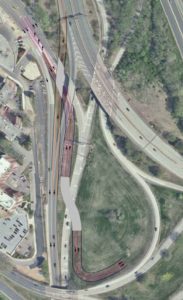 The exact placement of the tower and its accompanying parking garage and ground floor welcome center and theater may seem unusual and fraught with regulatory hurdles, but Burch says it is doable.

“The Tower is projected to be on a VDOT property just outside Rosslyn at the foot of Wilson Boulevard, between River Place and the Potomac River,” he said via email. “It will be 325′ tall, about 100′ lower than the Rosslyn skyline, and below the National Airport height limitation of 328′. It will be one floor of parking (all parking on site), one floor of introductory experiences on top of the garage, and all covered by a 4-acre landscaped public park, with walking and bike paths. There will be one 10,000 sq. ft. floor at the top of a spindle, accessed by glass elevators, and another 10,000 sq. ft. floor at that elevation for events — 650 sit-down dinner or 1,000 for a standing reception.”

“The only way in or out will be via Wilson Boulevard, where a new road will go under the tunnel and into the property via a bridge or a tunnel,” he continued. “The Commissioner of VDOT has said that this will not be an engineering problem, and our traffic engineer has said that we will not cause noticeable traffic congestion.”

Another part of the plan: a possible connection to the Potomac River.

“We are hopeful that, once we have accessed the road going toward the Potomac River and the Mount Vernon Trail, that the National Park Service may be amenable to our further connection to it,” Burch said. “We are going to do all we can to accomplish this. This will also need citizen and Board support.”

The Spirit of America Tower is getting some early support from prominent community members. Among those on an advisory committee for the project, a source tells us, is state Sen. Barbara Favola (D).

Burch says he’s about to begin the design process for the facility.

“I have spent more than a year talking with interested constituencies — finding out who wants what and getting their ideas — and we are now ready to design it,” he said. “After that, VDOT has a rather exhaustive process that takes up to a year to get through. Supposing that goes well, we could begin construction in a year and a half.”

Once built, the idea is for the Spirit of America Tower to be more than a tourist attraction. It should be not only a monument to the American spirit, but a way to help people achieve their dreams.

“Visitors will emerge from the Spirit of America Tower energized not to let life get in the way of fulfilling their life’s talent,” said a description of the project. “We are going to have a consumer desk as they leave in which they will get assistance with whatever their dream is. Typically, we might think such a center would provide for what a business needs, but what if someone’s dream is an urban garden, or to help with hospice, or any number of things? We will offer assistance for it all.”

Anybody who wants to offer comments or other feedback on the project, Burch said, should personally call him at 703-818-8080 or email him at [email protected].