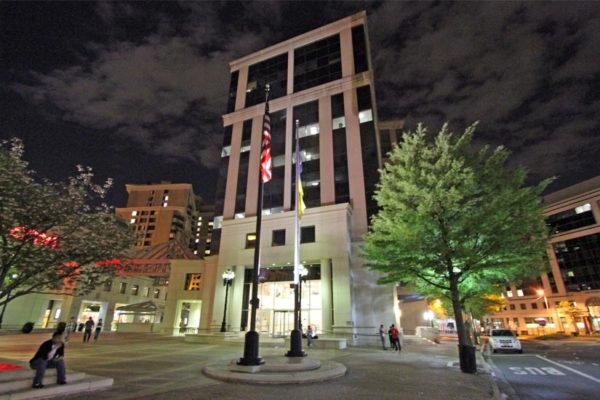 The Arlington County Board on Saturday is set to consider a lease renewal for county government headquarters at 2100 Clarendon Blvd in Courthouse.

Under the proposed agreement with property owner Vornado, according to a staff report, rent on the 235,000 square foot facility would actually go down, at least initially, though it would then rise 2.5 percent per year through the end of the lease in October 2033.

Starting in 2033, the county would have the option of renewing in five-year increments through 2062. Arlington, however, is also considering building its own headquarters nearby, to open before the end of the 15-year lease term.

The 15-year term of the Amendment is sufficient to give the County time to plan for and build a new administrative building at Courthouse Plaza if the County decides to do so. Based on the length of the term extension, staff believes it is now necessary to refurbish the County’s leased premises. The refurbishment would be paid for, in part, by the tenant improvement allowance provided by Landlord, the free rent, and the commission rebate (total = approximately $35.9 million). The scope and cost of any refurbishment will be determined by the County after a space utilization study.

In addition to a multi-million dollar office refurbishment, paid for by landlord and leasing agent concessions, under the lease renewal Arlington would gain the right to add a daycare facility to the building and to place an emergency generator on top of 2300 Clarendon Blvd, to serve the county’s Emergency Communications Center there.

County Manager Mark Schwartz is recommending the Board approve the lease renewal, given what the staff report describes as “fair and reasonable terms” offered by Vornado.