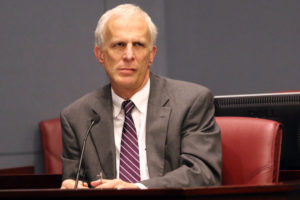 Arlington County Manager Mark Schwartz has proposed a series of budget cuts to halve his proposed two cent tax increase to one cent.

The cuts to Schwartz’s proposed budget total $11.1 million and include everything from a multi-million dollar reduction in school funding to a reduction of hours at the Glencarlyn library and the elimination of a management intern position in the parks department.

The potential reductions would affect a range of County services, including Human Services, Libraries, Parks and Recreation, Community Planning and Housing and Economic Development. The options also include eliminating both planned service improvements in the streetlight program and additional staff for the County jail. Schwartz also recommended that, based on the principles of revenue sharing between County Government and Arlington Public Schools (APS), $3.5 million of the cuts from the on-going budget and $1.7 million of the cuts from the one-time budget come from the APS budget.

The Arlington County Board advertised Schwartz’s recommended two cent tax rate increase but also asked him to recommend some budget cuts, as an option to consider.

“Putting together budget reduction options is always difficult, particularly given the growing demands and potential impacts on our community,” Schwartz said in a statement. “The package makes no change to the additional resources committed to Metro. Since we presented our Proposed Budget on Feb. 25, jurisdictions are facing a Metro funding deficit that may grow even larger.”

Under the advertisement, the Board cannot raise the property tax rate more than two cents for every $100 in assessed value this year. (At last month’s meeting, Board members Libby Garvey and Christian Dorsey proposed, unsuccessfully, setting the advertised rate three cents higher than the current $0.991 for every $100.)

The Board will hold public hearings on the budget and the tax rate on March 28 and March 30, respectively. Final adoption of the budget is scheduled for April 22.