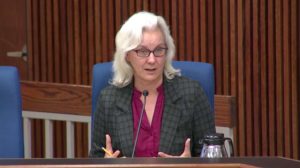 Arlington Public Schools’ preliminary FY 2018 budget has an $11 million gap in funding after the School Board approved its proposal last night.

The budget now stands at just over $614 million, down from Superintendent Patrick Murphy’s initial plan of $617 million.

County Manager Mark Schwartz’s proposed additional real estate tax hike, in part to help fund schools, would likely make up the shortfall in county funding. The state has also kicked in an additional $78,000 to help with construction projects.

During Thursday’s meeting, members found savings by again tweaking the budget plan. Savings include $1.8 million on technology, adding a transportation planner and removing a School Board staff member. Various other job cuts would only take effect if the County Board does not provide the extra money.

Board members emphasized that the savings on technology do not relate to the controversial one-to-one policy of giving each elementary student an iPad. Leslie Peterson, assistant superintendent for finance and management services, said that instead the savings have come through looking at the school system’s procurement of contracts.

School Board member Reid Goldstein said staff and elected officials have worked tirelessly to bring the funding deficit down from more than $20 million. He said that even with the efficiencies found, the budget plan balances educating students with fiscal responsibility. 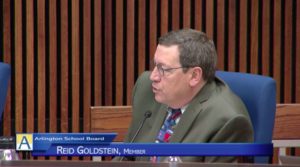 “I think we’re in a spot where we’ve got something really viable and [it] does contribute to our needs, and the overwhelming cost of course is growth for next year,” Goldstein said.

School Board members presented the budget plan to the County Board earlier today. The County Board is set to adopt its budget and tax rates on April 22.

END_OF_DOCUMENT_TOKEN_TO_BE_REPLACED

More Stories
WWBG: Taking Another Look at a Brewer and PatriotOpen Houses In Arlington This Weekend