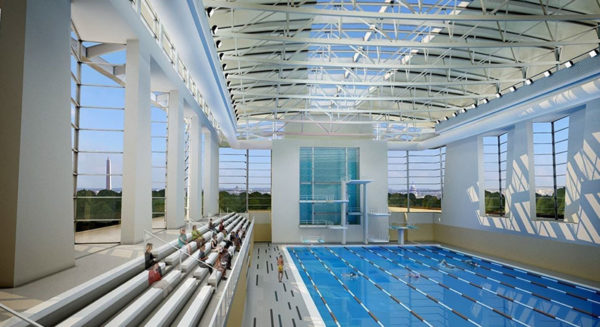 After a years-long delay caused by anticipated cost overruns, Arlington County says it’s finally ready to move forward with the second phase of the Long Bridge Park project, including a scaled-down aquatics and fitness center.

The county will be using a design-build approach to keep costs down, according to a press release. Contractors bidding on the project will be able to propose designs incorporating some portion of a “menu” of desired features, provided that the bid stay within budget and retain a number of core elements.

“The new facility will include the core programs that have been the mainstay of the planned aquatics facility and surrounding park improvements,” the county said. “A menu of potential options recommended by the Long Bridge Park Advisory Committee… include advanced energy efficiency, a therapy pool, a 10-meter dive tower and more spectator seats, among other enhancements.”

“We’ve selected design/build as the best way to fulfill the vision for this unique park in the most cost-effective manner,” County Manager Mark Schwartz said in a press release. “We are eager to move forward and develop conceptual designs that the public will have an opportunity to weigh-in on this fall.”

Through its design competition, the County plans to narrow the field of firms competing for the contract to three or four finalists. Each will be paid a stipend to submit a proposed concept for the park and facility. The concepts then will be evaluated against the County’s requirements. The public will be able to review the concepts and share feedback. The County Board will approve the final concept.

The budget for the total Phase 2 project, as approved by the County Board in the FY 2017-2026 Capital Improvement Plan, is $63 to $67 million, the amount of funding originally approved in 2012.  The final total will depend on decisions made during the design process. The budget includes, in addition to the aquatics facility, an extension of the esplanade, rain gardens, public gathering spaces, parking, public art and additional environmental remediation.

The next step is for the County to give firms the opportunity to submit their technical qualifications, which will be evaluated against established criteria.  Firms that qualify will be invited to submit a proposal this summer. Three or four firms who submit design concepts will be invited to participate in the design competition. The public will review the concepts in November 2017, with the Board then selecting the final design. Construction is expected to begin in late 2018.

The first phase of Long Bridge Park was completed in 2011. The park is located at 475 Long Bridge Drive, just north of Crystal City.