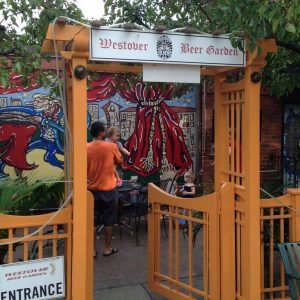 Supporters are again worried that the popular Westover Beer Garden could be in danger of closing, this time because of Arlington County enforcing limits on its outdoor seating.

Westover Market — which combines a grocery store, restaurant and beer garden — went before the County Board late last month in a bid to add live indoor entertainment, expand its outdoor entertainment hours and have furniture on its patio year-round.

But that plan was scuttled in part by county staff finding the business at 5863 Washington Blvd violated several county rules. Some of the violations came to light the week before Westover Market went before the County Board and were included in the staff report on the plan.

In addition to alleged noise violations, Westover Market was accused of having more seats than it is allowed outside. The county states it can have a maximum of 29 outdoor seats, but in the April 25 meeting, CEO Devin Hicks admitted there are more than that.

According to a “Save the Beer Westover Garden” Facebook page, which has been active for several years through Westover Market’s issues with the county and a few neighbors, the owners of the market are scheduled to meet with county staff this Friday.

They will reportedly ask the county to suspend enforcement of the limit on seating on the patio, and have asked the fire marshall’s office for its opinion on a safe capacity. The market said it will also do the sound testing as required, and will comply with decibel limits and the hours that music is allowed.

Owner David Hicks wrote in a Facebook post that the business needs the extra seating to keep revenue up and survive.

“Here is the bottom line regarding Westover Market,” he wrote. “The business is not viable without the beer garden revenue. The beer garden is not viable without additional seating/occupancy. Every other problem can be overcome — including limits on music noise and restrictions on live music. But the outdoor seating is existential for the Market.”

“This would be devastating to the employees, the community, and not a good outcome for the county,” the Save the Westover Beer Garden said in another post. “We want the county to work with us to develop a plan that allows the beer garden’s continued existence and supports small businesses across the county.”

Representatives with Westover Market tried in vain to just add extra seating during the County Board meeting, only to be rebuffed as members said they wanted to see compliance with the rules already in place.

“This is actually fairly easy for me,” said Board member Christian Dorsey. “Let’s establish a record of continuing to move forward with compliance before considering other alternatives. That’s all I see to this issue.”

County Board chair Jay Fisette said he was open to considering expanding the outdoor seating in the future if the market complies.

“I understand it’s a violation. But I also sit here and go almost everybody loves this place,” he said. “It’s a really popular neighborhood place. We’re talking about sound, we’re talking about nights and all the rest, but they’ve obviously got more interest than the condition allows them to have seats outside under the permit.”