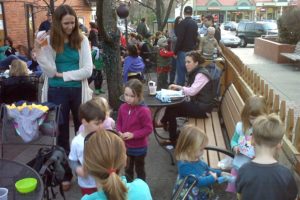 (Updated at 5:25 p.m.) County staffers are recommending against Westover Market’s application for live entertainment at its popular outdoor beer garden.

The County Board is set to vote on the permit application at its meeting on Saturday. The permit would allow the beer garden to host concerts, open mic nights and other forms of live entertainment.

The presidents of four surrounding civic associations have all written letters to the County Board in favor of live entertainment at the beer garden. The leaders said their associations voted overwhelmingly in favor of a compromise plan between Westover Market and neighbors.

The compromise would allow the beer garden to host live entertainment from 6:00 to 10:00 p.m. on Friday and Saturday nights, plus open mic nights from 7:00 to 9:00 p.m. on Wednesdays, provided that the Market keeps the sound at decibel levels consistent with the county noise ordinance. The Market has also agreed to only host outdoor entertainment from April 1 to October 31, according to the staff report.

Nonetheless, some neighbors have remained steadfastly opposed to the beer garden and the noise and crowds it generates. Here’s the summary of the county staff recommendation against the permit:

Staff does not support the request for several reasons: The outdoor café’s close proximity to single-family residences (residential back yards abut the shopping center parking lot), and the low-density and low-activity character of the Westover Shopping Center area and the “C-1” Zoning District in general; practical difficulties in the enforcement of live entertainment conditions and noise and capacity regulations which largely rely on self-enforcement, and the present applicant’s past history of noncompliance with County ordinances and regulations. Furthermore, only once before has the County Board approved a request for outdoor live entertainment (SoBe in Clarendon, located in a “C-O” zoning district); that was termed an “experiment” and was approved only with the justification that the location was a high-density commercial area far away from residential uses. Therefore, staff recommends denial of the use permit request for a restaurant with live entertainment.

The permit does not address the legality of the beer garden itself.

“Whether the applicant can have the outdoor Beer Garden is not in question,” county staff wrote. The number of outdoor seats the beer garden is ultimately allowed to have will be determined when it applies for a Certificate of Occupancy later this summer, following the construction of enhanced Americans with Disabilities Act-compliant facilities.

The staff report says that the beer garden is already allowed to have certain types of entertainment.

“The applicant’s ability to have radio, TV and ‘piped-in’ music in the outdoor cafe should create the sort of family-friendly fun atmosphere that the applicant and the community desire,” county staff wrote.

A Facebook group set up to support the Westover Beer Garden has nearly 1,500 “fans.”