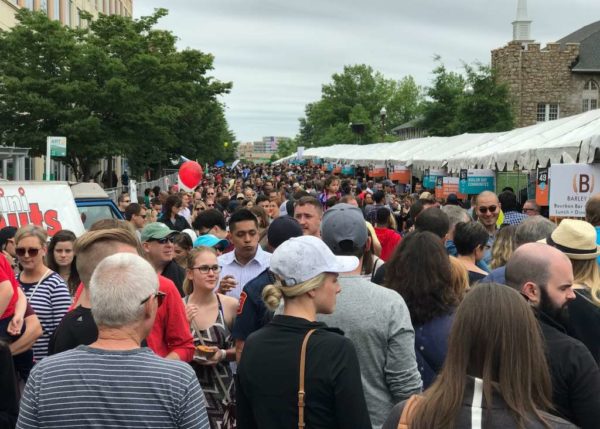 Public Hearings Set for Sign, Rosslyn Streetscape Changes — At its meeting Saturday, the Arlington County Board set public hearings for changes to the county sign ordinance related to mixed-use retail centers and industrial districts, which would allow for more blade signs in certain places. The Board also set hearings for a plan that “would establish a cohesive set of streetscape furnishings to strengthen Rosslyn’s character, and encourage more pedestrian use and vibrancy in Rosslyn’s core.” [Arlington County]

Washingtonian Spends Day in Crystal City — The staff from Washingtonian magazine spent Friday — Bike to Work Day — in Crystal City, filing stories about everything from quirky neighborhood fixtures like a reasonably-priced strip club and a long-time puppet store to WeLive, TechShop and other places driving Crystal City’s innovation economy. The goal was to report “stories of a place that’s creating a new future for itself in the ashes of one that didn’t quite work out the way everyone thought.” [Washingtonian]

Beyer Calls for Expulsion of Turkish Ambassador — On Friday Rep. Don Beyer (D-Va.) urged the Trump administration to kick the ambassador of Turkey out of the country in response to a violent confrontation between protesters and bodyguards for the visiting Turkish President Recep Tayyip Erdogan. Turkey, meanwhile, today summoned the U.S. ambassador to complain about police treatment of the bodyguards who were seen beating up protesters. [Rep. Don Beyer]

D.C. Man Is Big Arlington Thrive Donor — A retired ophthalmologist who lives in D.C. has donated more than $750,000 to the nonprofit Arlington Thrive over the past few years, after reading about it in a Washingtonian magazine article. Arlington Thrive, formerly known as Arlingtonians Meeting Emergency Needs, “delivers same-day emergency funds to our neighbors in crisis, so they can be secure in their jobs, health, and homes and thrive in a caring community.” [Washington Post]

Board Approves Intersection, Stormwater Projects — The Arlington County Board has approved more than $2.3 million in contracts to improve safety at the intersection of Arlington Blvd and N. Irving Street and construct a “green streets” stormwater management system along Williamsburg Blvd. [Arlington County]

Arlington Represented on Route 1 Renaming Group — The former president of the Arlington NAACP and former president of the Arlington Historical Society have been appointed to an “Ad Hoc Advisory Group on Renaming Jefferson Davis Highway” formed by the City of Alexandria. The city is moving forward with its effort to strip Route 1 of its confederate monicker, but wants to coordinate with Arlington in case the county decides to lobby Richmond to allow it to rename the road. [WTOP]

Columnist Blasts Website Comments — “Our Man in Arlington” columnist Charlie Clark says that reader comments about the candidates in the recent Democratic Arlington County Board caucus were “inflammatory” and “pea-brained.” He singled out ARLnow’s comment section and “the slightly-more-civil commenters in the Sun-Gazette.” Caucus winner Erik Gutshall, meanwhile, said he seldom reads the comments, opining that “some are thoughtful, but it’s like opening a horror show.” [Falls Church News-Press]