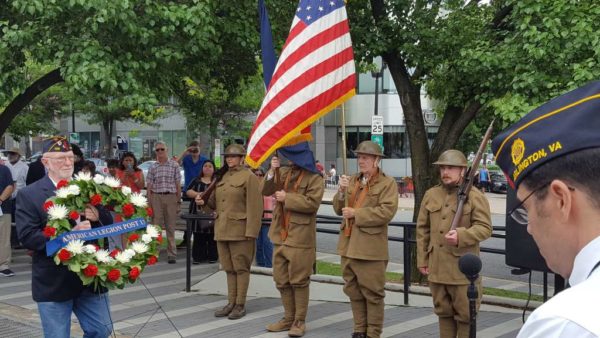 High School Proposals on the Table in June — A pair of proposals for adding high school seats are on the table at Arlington School Board meetings next month. The board is expected to approve a $3.6 million construction contract for adding 300 seats to Wakefield High School, while Superintendent Patrick Murphy will recommend the board approve a “hybrid” option for adding another 1,300 seats, with 600 seats at the Education Center site near Washington-Lee and 700 at the Arlington Career Center. Despite the added capacity, Murphy expects that it will eventually be necessary to build a new 2,200 seat comprehensive high school to keep up with rising enrollment. [InsideNova, InsideNova]

Marriott’s Longest-Standing Employee Is in Crystal City — Cecil Exum, a 79-year-old omelette maker at the Crystal Gateway Marriott, is Marriott’s longest-standing employee. He’s been with the company for 61 years, since the Marriott family ran a “Hot Shoppes” root beer stand and opened its first hotel, the Twin Bridges Motor Hotel in Arlington. [Washington Post]

POTUS at ANC on Memorial Day — “President Donald Trump honored those who lost their lives serving the nation as he participated in a solemn wreath-laying ceremony at Arlington National Cemetery Monday and told emotional stories of just a few who perished.” [Daily Mail]

Cars Towed During Clarendon Memorial Day Ceremony — Some veterans attending the annual Memorial Day ceremony at the war memorial in Clarendon reportedly had their cars towed from a bank parking lot nearby. Del. Patrick Hope (D) tweeted photos of the cars being towed and called it “disgusting.” He directed the tweet at Del. Tim Hugo (R), the sponsor of the bill (now law) that blocked Arlington County from enforcing a “second signature” requirement for certain trespass tows. [Twitter]