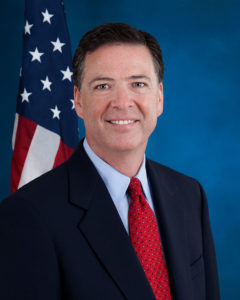 D.C. isn’t the only wonky place with bars and restaurants opening early, offering specials and putting today’s James Comey testimony on the TVs. Some in Arlington are also getting in on the action.

The most hotly-anticipated Senate Intelligence Committee hearing in recent memory is scheduled to begin at 10 a.m. Though the lack of a spectacular new revelation in Comey’s prepared remarks may be tamping down the enthusiasm a bit, many are still eager to hear what Comey has to say about President Trump — and, on Twitter, vice versa.

Here in Arlington, Liberty Tavern will be opening early, at 10 a.m., and putting the hearing on its five large TVs.

“We will serve free covfefe! And White Russians and Stoli and grapefruits during the hearing will be $5,”a rep for the Clarendon restaurant once visited by President Obama told ARLnow.com. “Lastly, we’ll offer all of our 12-inch wood-oven specialty pizzas for $10, including our popular brunch pizza that features our homemade breakfast sausage, house cured bacon, fried eggs, tomatoes, cheddar and sage.”

Also hosting hearing watchers is Ballston watering hole A-Town Bar and Grill, which will open at 10 a.m. and put the proceedings on its many TVs.

In Courthouse, Ireland’s Four Courts will be open for lunch and have hearing coverage on its TVs with the volume on. The pub will also offer lunch specials during the hearing.