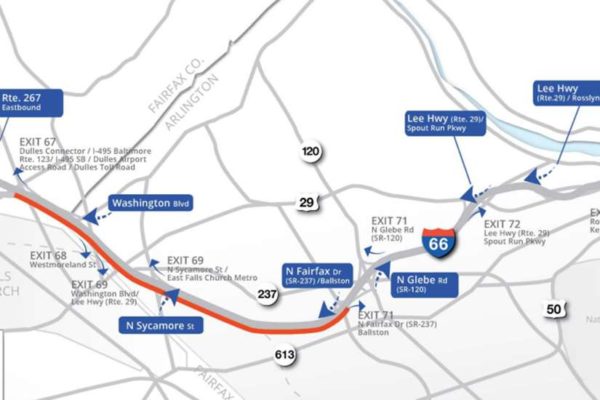 A plan to revamp Interstate 66 is threatening the character of the Custis Memorial Parkway, the highway’s name inside the Capital Beltway, historic preservation advocates said today (Wednesday).

Preservation Arlington, a nonprofit group that looks to protect Arlington’s architectural heritage, released its annual list of “endangered historic places,” with the parkway named as one.

The Virginia Department of Transportation is in the midst of an ambitious plan known as “Transform 66” to widen I-66 from the Dulles Connector Road to the Fairfax Drive exit in Ballston within the existing eastbound right-of-way.

Under the plan, VDOT would also add tolls and improve local trails, as well as build a pedestrian bridge in East Falls Church.

But Preservation Arlington said the plan could undermine “the roadway’s unique parkway design.”

“Plantings are no longer maintained. Corten steel guardrails and sign supports are being replaced with standard, steel interstate highway components,” the group wrote. “The new toll road gantries, and large, new sign supports (and highway signage) on nearby arterial roads have further eroded the parkway’s ability to blend into its surroundings.”

Another piece of history under threat, according to Preservation Arlington, are the Education Center and Planetarium, chosen last week by the Arlington County School Board for an extra 500-600 high school seats and a renovation.

A request had been made to designate the site as a historic district, but the County Board followed staff’s recommendation and denied that designation in May.

“While some exterior improvements will be necessary it is hoped that this will be minimal and will not alter the appearance of the historic structure,” Preservation Arlington wrote. “Designed as a headquarters building to show the strength and commitment to education, the building is iconic in our community.”

Also under threat, according to Preservation Arlington: