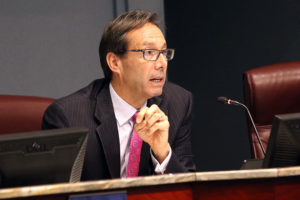 Jay Fisette, the most senior member of the Arlington County Board, has less than six months to go until his retirement. And while it will not happen during his tenure, there’s something Fisette wants for Arlington, eventually: for it to become a city.

Fisette says Arlington has more in common with Virginia cities, like neighboring Alexandria and Falls Church, than it does with counties. And, he says, it makes sense that an increasingly urbanized place like Arlington should be governed as a city.

Additionally, many already refer to Arlington as a city, and for population-counting purposes the U.S. Census Bureau includes Arlington in its list of Virginia towns and cities, an exception the Bureau only makes for Arlington and for places in Hawaii, which has no incorporated cities.

A change to city status, however, would require action by Virginia’s state legislature.

“Today, we are the geographically smallest, and most densely populated self-governing county in the U.S. and my experience is that we have much more in common with cities than counties,” Fisette continued. “I have not looked into this in a while, however, I know the change to a city would require General Assembly action. While I am not clear what they are, there may be some further changes that would be automatic with a city designation.”

In 2010, an attempt to change Arlington’s form of government, to one in which County Board members are elected by districts rather than at-large, failed to gather enough valid petition signatures.

Fisette didn’t reveal any plans to take action on changing Arlington from a county to a city, but did say he hopes it is “considered” by county leaders moving forward.

Fisette discussed the idea last month at the Crystal City Business Improvement District’s annual meeting. At the meeting, he also expressed his belief that the “City” in “Crystal City” should be lopped off and the neighborhood renamed simply “Crystal.”