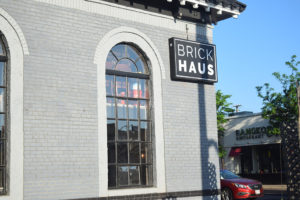 New Columbia Pike beer garden BrickHaus is still awaiting its grand opening, despite having wrapped up most construction in May.

On Friday, BrickHaus — located at 2900 Columbia Pike and owned by Tony Wagner, who also owns Twisted Vines across the street — announced that it had received “one more final approval” and was on to what may be the last regulatory hurdle before opening.

On its Facebook page, locals who have been waiting for a new outdoor drinking and dining venue on the Pike all summer long have been grumbling about the Arlington County inspection process that has kept BrickHaus closed. The process has been notoriously long and difficult to navigate for many other local businesses, as well.

“You should publish a log of the permitting and inspections delays and issues you faced,” one person said. “We know they’re bad, but we don’t know what they are.”

“That’s an interesting idea, but since the issues keep coming at us daily, that would be a full time job in itself,” the BrickHaus Facebook page replied. “Basically, we continue to work through the process. Each day getting closer, but too gun shy with the constant curve balls to share a date yet.”

“Arlington is so slow when it comes to permits!” said another Facebook poster.

“See if you can find someone in the Economic Development office to help you!” suggested another, likely referring to the county’s business ombudsman. “Their mission used to be to get business to stay and grow in the County. Allegedly they have people that can facilitate getting things through the process.”

In a previous post, BrickHaus said that once it gets all of its final approvals, it would take about two weeks to train staff and open its doors.