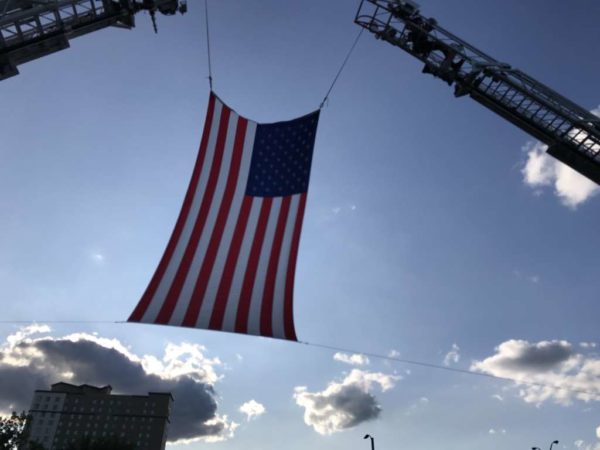 Sixteenth 9/11 Anniversary — A flag was unfurled at the Pentagon this morning as the nation marked the 16th anniversary of the 9/11 terror attacks. President Donald Trump, Defense Secretary James Mattis and Joint Chiefs chairman Gen. Joseph Dunford were among those expected to attend a ceremony at the Pentagon, honoring the 184 people killed in the attack there. Arlington County also hosted its own remembrance ceremony and is posting recollections from Sept. 11, 2001 on social media. [ABC News, Twitter, Twitter]

Another Police-Impersonation Phone Scam — Local residents are again getting calls from a scammer claiming to be a law enforcement officer, demanding a fine be paid over the phone. As a reminder, police never call on the phone to collect fines. [Twitter]

Arlington 9/11 5K Recap — The 2017 Arlington Police, Fire and Sheriff 9/11 Memorial 5K was held in Pentagon City on Saturday evening amid perfect September weather. Among those on hand to address the crowd were Police Chief Jay Farr, County Board Chair Jay Fisette and former Virginia Gov. Jim Gilmore. Spotted among the runners: former White House press secretary Sean Spicer, who was wearing a Navy t-shirt and was all smiles after the race as the occasional group of fellow runners asked to take a photo with him. [Facebook, Chronotrack]

Park Service May Revamp MVT Boardwalk — As part of a larger improvement project for Theodore Roosevelt Island and the TR Bridge, the National Park Service is considering rehabilitating the nearby, aging boardwalk bridge along the Mount Vernon Trail, which carries bike and pedestrian traffic. [The Wash Cycle]