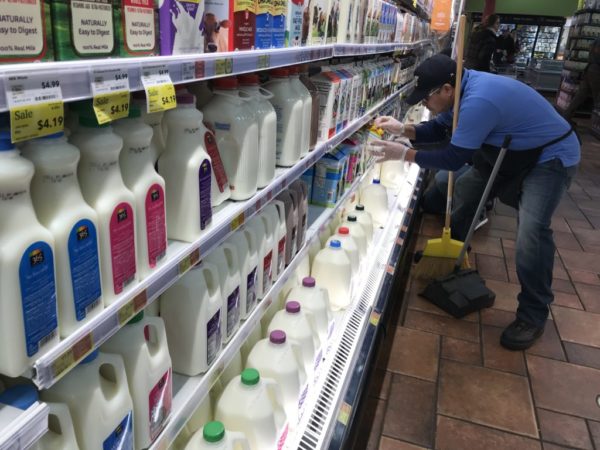 Much of the D.C. region is under a Winter Weather Advisory tonight as a coastal storm packing snow, icy cold temperatures and strong wind nears.

Arlington County crews have been mobilized and are treating roads in anticipation of an inch or so of snow tonight and tomorrow, potentially disrupting the morning commute.

As of 4 p.m., grocery store shelves in Clarendon still had plenty of milk and toilet paper, though the former was being frequently restocked by store employees. The scene, at least thus far, was nothing like that outside a D.C. Trader Joe’s store that was mobbed by customers last night.

A Winter Weather Advisory has been issued for the Washington and Baltimore metro areas and points to the east from late this evening through Thursday morning. Expected snow totals are higher the further east you go. pic.twitter.com/yVoDRlaLQY

… WINTER WEATHER ADVISORY IN EFFECT FROM 10 PM THIS EVENING TO 11 AM EST THURSDAY… * WHAT… SNOW EXPECTED. PLAN ON SLIPPERY ROAD CONDITIONS, INCLUDING DURING THE MORNING COMMUTE ON THURSDAY. TOTAL SNOW ACCUMULATIONS OF AROUND ONE INCH ARE EXPECTED. * WHERE… THE DISTRICT OF COLUMBIA, PORTIONS OF CENTRAL, NORTH CENTRAL AND NORTHERN MARYLAND AND CENTRAL AND NORTHERN VIRGINIA. * WHEN… FROM 10 PM THIS EVENING TO 11 AM EST THURSDAY. * ADDITIONAL DETAILS… VERY COLD CONDITIONS MEAN THAT SNOW WILL QUICKLY STICK ON ROADS AND SIDEWALKS… MAKING THE THURSDAY MORNING COMMUTE DANGEROUS. PLAN AHEAD AND ALLOW EXTRA TIME TO GET TO YOUR DESTINATION IF TRAVELING LATE WEDNESDAY NIGHT OR THURSDAY. BITTERLY COLD CONDITIONS WILL FOLLOW FOR LATE THURSDAY THROUGH THE WEEKEND CAUSING SNOW TO REMAIN ON UNTREATED SURFACES. PRECAUTIONARY/PREPAREDNESS ACTIONS… A WINTER WEATHER ADVISORY FOR SNOW MEANS PERIODS OF SNOW WILL CAUSE PRIMARILY TRAVEL DIFFICULTIES. BE PREPARED FOR SNOW COVERED ROADS AND LIMITED VISIBILITIES, AND USE CAUTION WHILE DRIVING. THE LATEST ROAD CONDITIONS FOR THE STATE YOU ARE CALLING FROM CAN BE OBTAINED BY CALLING 5 1 1.

Virginia Department of Transportation and contract crews will mobilize late Wednesday night to treat roads for snow forecasted to arrive before Thursday morning’s rush hour. A second week of frigid temperatures continues to turn falling precipitation into slick road conditions. Small amounts of snow falling on below-freezing roads can easily melt from the friction of vehicle tires and then quickly refreeze into a layer of ice.

Once fully mobilized, please watch for crews as they stage along roads ahead of time. Crews will treat roads with salt and sand as needed once snow begins to fall overnight Wednesday and will remain on duty until road conditions improve. Please give treatments trucks room to work, as they are very heavy and drive slowly.

Drivers are asked to: