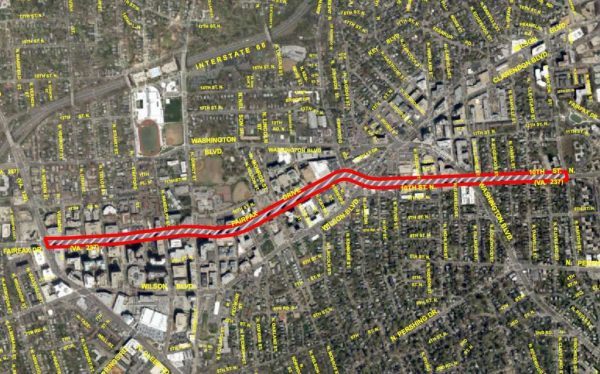 Arlington County is one final step away from controlling sections of Fairfax Drive and 10th Street N. along the Orange Line corridor.

The Arlington County Board will vote on Saturday (January 27) to approve a deal that would give the county control of the road between its intersections with N. Glebe Road and N. Barton Street, from roughly the Ballston to Courthouse neighborhoods. The roadway is currently controlled by the Virginia Department of Transportation.

The vote follows after the Commonwealth Transportation Board approved the transfer of control of the road, also known as Route 237, in December. The county requested that transfer in July 2017.

Making the portion of the roadway a part of Arlington’s local road system would streamline reviews for development and other changes, and give the county more flexibility to implement multimodal improvements.

In a report, county staff said Route 237’s current ownership under the state makes the county go through an “extensive review process with the Virginia Department of Transportation for all site plan development reviews and county transportation infrastructure projects.”

Staff said there is also a “cumbersome design-exception process” that costs the county more time and money for each project under VDOT supervision. The transfer could also cost the county between $60,000 and $70,000 a year for added road maintenance responsibilities, the cost of which are only partially reimbursed by the state, according to a fiscal impact statement.