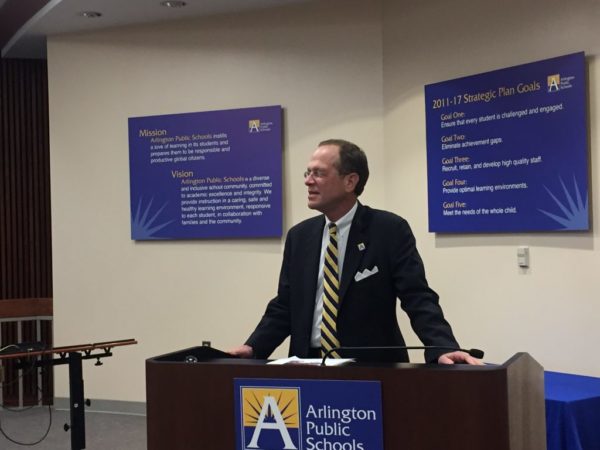 Superintendent Patrick Murphy proposed a fiscal year 2019 budget of $636.7 million at Thursday’s School Board meeting. That’s an increase of 3.8 percent from the 2018 budget, lower than the 5.4 percent increase from 2017 in to 2018. Murphy said APS is facing the same budget pressures as the county, which is projecting only a modest increase in tax revenue.

Class sizes will increase slightly under the proposed school budget, with grades four through five seeing the largest increase of an estimated one student per class. Middle schools will see a .75 pupil increase, and high schoolers will see a .5 student increase.

The budget will again include a step increase in salary for all eligible employees and a further raise for employees, like assistants and bus drivers, who aren’t already earning market rate salaries.

Compensation step increases will cost $9.7 million in 2019, and “salary adjustments” will cost $2.2 million.

The majority of the budget, 77.7 percent, will go toward salaries and benefits. The next largest expenditure will be debt service, at 9.1 percent, as APS continues to build and expand schools to keep up with enrollment. The cost of materials and supplies will take up 3.4 percent of the budget.

Murphy emphasized that as Arlington Public Schools is on pace to grow to 30,000 students by 2021, “we’ve got to begin to think about a sustainable future.”

The schools are projected to add 2,200 children per class year starting in 2019. In 2019, enrollment growth related expenses, like staffing and supplies, will cost $5.82 million. Several new schools on targeted to open for the fall 2019 semester, according to Murphy.

“Many of the decisions that we have made are not my preference, are not where we want to be,” Murphy said before his presentation to the School Board, noting his desire to balance the needs of an increased enrollment with employee compensation and continued funding for 2017 and 2018 initiatives.

“These were tough decisions that we needed to make.”

Projected expenditures initially exceeded projected revenue by $16.5 million. Additional revenue and use of reserve funds scraped together $6.5 million, and expenditure reductions and service changes — like changes in elementary school foreign language programming — brought in an additional $10 million to address the shortfall.

APS also found other creative ways to address its budget gap, including joining an Apple program that will buy back used iPads and laptops, generating about $1 million in revenue.

Among other ways to weigh in on the budget, residents can email Arlington Public Schools ([email protected]) with feedback. The School Board will be holding budget work sessions and hearings in February and March, ahead of its final budget adoption.