Title insurance is boring, but Allied Title & Escrow is here to decode the jargon and make it (somewhat) more interesting. This biweekly column will explore the mundane (but very necessary!) world of title insurance while sharing interesting stories of two friends’ entrepreneurial careers.

People ask me (Latane) all the time how and why I ended up in the title industry after being in the obstacle racing industry. The answer: It really makes no sense!

With that said, one thing I did consider as I got older and had a couple of kids to support was whether it was smart for me to be in an industry (eg., Obstacle Races) which was so boom or bust. Title insurance seemed a bit less risky than obstacle racing but today we will explore the horror stories of owning a business in each industry.

In our title tip of the week, we will also explore a horror story of a consumer who didn’t buy title insurance. 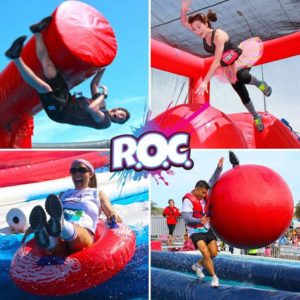 When you take an obstacle race to a new city, you are committed to spend hundreds of thousands of dollars for that weekend whether people sign up or not. Sometimes though you are lucky enough to get thousands to sign up for your race but that doesn’t mean you are in the clear. One such incident occurred in October of 2013 when we took the Ridiculous Obstacle Challenge (ROC Race) to New York City. We were very excited as we had over 25,000 participants signed up which was our most successful race to date.

What we didn’t expect was that this one weekend would be the only time in over 50 races that we were setting up the course on federal land. That week we learned that federal government would shut down for the first time in 17 years. As a result of the shutdown, federal employees would not be working and thus the property would be chained up and no one would be allowed on the land.

Although we had a no refund policy, we tried to do the right thing by offering refunds but first we informed everyone we would be rescheduling the event for two weeks later at a different location. We hired a communications/PR expert when making the decision to offer refunds who estimated only 8% of participants would take us up on the refunds. Unfortunately 55% took us up on that offer and an entire year of profits went away in a blink of an eye.

We had tried to plan for all types of situations, but that was one we never considered. We actually came up with a new internal saying after the event: NEVER EASY!

Owning a title company has its own set of risks. Although we at Allied Title & Escrow are fortunate to have top of the line security systems and protocols in place and have never had a security issue, other title companies have been hacked.

One such scam that overseas hackers have successfully pulled off is hacking a title company’s email and then reaching out to a buyer who is about to wire money and telling them to wire it to another to another bank account. It’s possible for a buyer to wire $1 million to the wrong account and have no recourse to get that money back.

Always call the title company to confirm wire instructions! We take extra precautions by continuously changing our passwords amongst a variety of other security measures to make sure our customers are protected.

Title Tip of the Week — the Horror story edition:

You are required to buy title insurance for the lender if you are getting a mortgage. The owner’s policy for yourself is optional but don’t mess around with not getting your own policy.

The most painful horror story, which happens in our industry, is when a distant relative or ex spouse surfaces after you bought your dream home and they claim they actually own the property because they should have been on the previous deed but never were.

If a judge were to rule in their favor, you could have to pay them off to own your house in full and could be out hundreds of thousands of dollars. If you have an owner’s title policy in place you would be covered! In fact, an owner’s policy covers attorney costs and there is no deductible…you just pay one time when you close on your house.

END_OF_DOCUMENT_TOKEN_TO_BE_REPLACED

More Stories
Video: Teachers Get Engaged in Bishop O’Connell ClassroomTaste of Arlington to Feature Largest Restaurant Row in its History