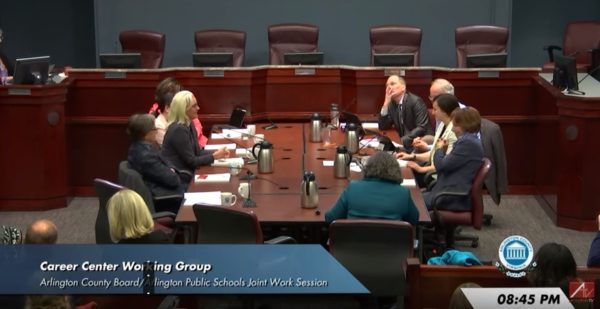 Kristi Sawert, who presented Career Center site considerations for programming and amenities during the work session, said that the pool possibility was “one of the more lively discussions” that the working group has had. Sawert listed several reasons for being pro-pool, including what she called a long-standing APS and School Board policy that aquatics education is essential.

“The main reason I hear that we don’t need a pool at the Career Center site is that those students could be bused to Long Bridge Pool when it opens,” said Sawert.

Sawert said that after having consulted with county staff, she believes that busing students isn’t feasible at the high school level because of the lack of free elective periods that students would need for off-campus travel. Busing, Sawert said, would only be a realistic option if students chose to give up core instructional time.

“Those lost hours would really add up,” she said, adding that this was a matter of equality between wealthy students who could afford private swim lessons and those who couldn’t.

Though County Board member John Vihstadt said that he thought a pool is appropriate and necessary, other board members had questions. County Board member Libby Garvey questioned why changes couldn’t be made to students’ schedules to accommodate activities like swimming.

“I totally agree with the need for swimming. I’m not sure we have to preserve the same schedule that we’ve had for a hundred years,” Garvey said.

Board member Erik Gutshall questioned how realistic it would be to have another pool in light of county-wide funding concerns.

“I’d want to know that if we’re going to build a pool, and if we agree it’s a great idea, that that pool is going to get absolute, full use and that all of our other pools that we have get full use,” he said. “Money is an object, and it’s going to be highly constrained in every decision [so] every recommendation has to be fully justified.”