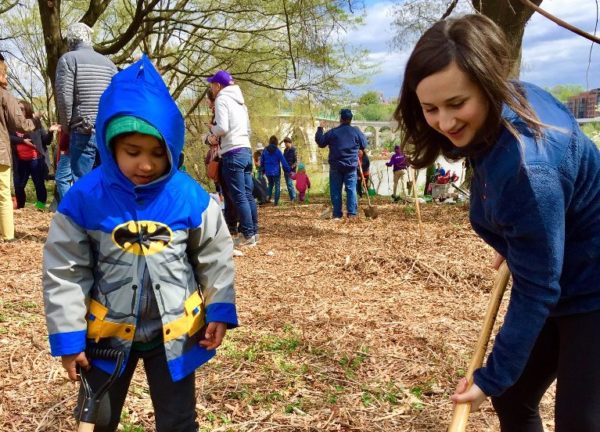 Yorktown Grad Chosen in NFL Draft — The Tampa Bay Buccaneers chose Yorktown High School graduate M.J. Stewart in the 2018 NFL draft. Stewart was working with his youth foundation at Langston-Brown Community Center when he learned that he was the 21st pick in the second round of the draft. [InsideNova, Twitter]

Amazon Speculation Boosts JBG Stock — JBG Smith Properties’ stock is up 13 percent in the past month on speculation that Amazon could build its second headquarters in the D.C. metro area. Many of the company’s holdings are based in Crystal City, which is seen as a contender for the site of Amazon’s new HQ2. [Washington Business Journal]

Rosslyn Circle Beautification — Arlington County Board Chair Katie Cristol was among the volunteers with the Tree Stewards of Arlington and Alexandria and the Children’s International School to team up with the National Park Service to beautify Rosslyn Circle on Sunday (photo above). They planted 32 trees and plan to add more later this year.

Red Flag Warning Today — Northern Virginia is under a Red Flag Warning through 8 p.m. today, indicating a heightened danger of outdoor fires. “Dry and windy conditions will create an environment conducive for the rapid spread of wildfires,” the National Weather Service said. “All outdoor burning is discouraged today.” [Twitter]