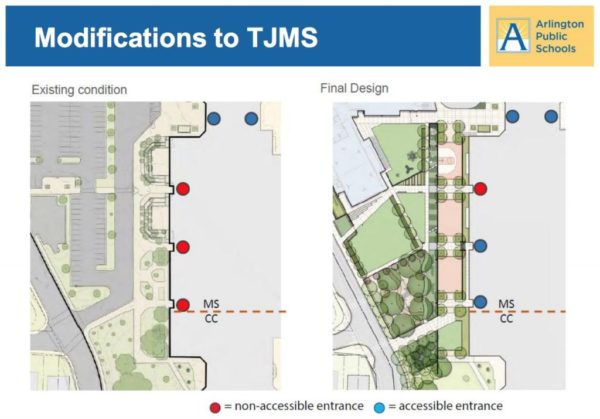 (Updated at noon) The price tag for a new elementary school could soon get a bit larger, in an effort to make the Thomas Jefferson Middle School more accessible for people with disabilities.

Arlington Public Schools officials are asking the School Board to approve an extra $250,000 in spending at Alice West Fleet Elementary School, which is scheduled to open in September 2019, for Americans with Disabilities Act (ADA) changes at the adjacent middle school.

The board will get its first presentation on that request at its meeting tonight, as staff seek the green light to bump up the “guaranteed maximum price” for the nearly $47 million project. The changes at the middle school are being incorporated into the Fleet project so that they can be “more effectively coordinated and can be completed prior to the 2018-19 School Year.”

Though accessibility upgrades are already in the larger APS budget, the size of the change to the Fleet budget means APS will need the board’s approval first. Voting on the matter is expected within a few weeks.

The board is set to approve its fiscal year 2019 budget tonight. The nearly $637 million spending plan is set to fund pay raises for most school employees, but does call for slightly larger class sizes at both the elementary and middle school levels.

Editor’s note: a previous version of this article mistakenly reported that the changes were planned for the elementary school. Photo courtesy Arlington Public Schools.