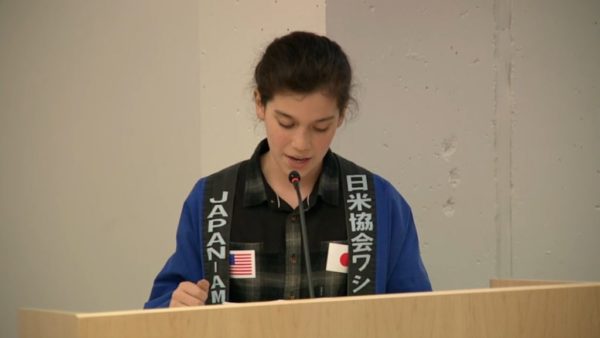 Arlington Public Schools will not offer high school students beginner’s level Japanese and German classes this fall, and some parents and students are speaking out about it.

Much of the loudest advocacy has been geared toward supporting up the Japanese classes. Public comments after a world languages presentation at last week’s School Board meeting (May 3) focused on the ways that the Japanese classes have made an impact on students.

“It’s not just a language, it’s not just something people take because they want to get the advanced diploma,” said one student, Juliana Logan. “It’s not an easy language, we take it because we care and we want to learn more about it.”

Another student, Liam Mason, started a Change.org petition that, as of May 4 (Friday), had garnered more than 1,800 signatures over the past week. The petition isn’t clear as to how many of the signers are Arlington residents.

Mason spoke of his strong desire to learn the language, calling the news of the phase out “devastating.”

The demand for Japanese and German courses has shrunk in recent years, according to Arlington Public Schools spokesman Frank Bellavia.

Bellavia added in an email to ARLnow that the school system “often [has] attrition from level one to level two… that means that there are even smaller levels at the advanced language level.”

“Therefore, we have decided to use our resources for courses that have a greater level of interest throughout APS,” he said.

Supporters have noted that the reason for the relatively low requests, compared to much more popular languages like Spanish or French (with a respective 2,326 and 673 enrolled students in the last school year), is due to school counselors advising students to switch to Chinese and the lack of a Japanese and German option at the middle school level.

Mason described how many students tend to stick with their middle school language as they advance grade levels, and that German and Japanese are thus dealt an unfair hand during enrollment.

“Counselors have told children to disenroll and it’s not offered in middle school, [yet] numbers are increasing by a surprising margin,” said Mason. His comments continued, stating that he believed that the anticipated larger class sizes would add more students to the program.

According to Bellavia, the advice from counselors came after it was determined that there would be insufficient enrollment for the 2018-2019 school year:

APS counselors do not advocate for one world language course over another. Students were given the same opportunity to select Japanese and German as they were all world languages within APS.  Each year, students select those courses they are interested in taking. Once all of the course requests are approved, school staff review the requests and then determine the number of sections needed for each course.  Each year, there may be some courses for which there is not enough student interest to run the course. Once it was determined there was not enough interest to run Japanese and German for the 2018-19 school year with the current model, counselors advised students that another option would need to be selected.

We are in the process of determining other potential options for offering these languages to those students who are interested.

A committee, Save Japanese in Arlington Public Schools, has been formed by the parents and students, seeking a one year deferment of the decision to allow for community input.

It’s unclear how much sway the committee could have, as Bellavia told ARLnow that all levels of those classes will be phased out by the 2020-2021 school year.

The phase out comes weeks after parents vocalized their collective frustration over budget cuts to the world language program at the elementary school level, known as FLES.

It also comes weeks after a Japanese high school planted dogwood trees at Arlington Career Center as a commemoration of a gift from the United States 103 years ago.

Arlington was chosen as the site of the gift as part of a desire to create a sister city status between Arlington County and Setagaya ward in Tokyo.

Marc Hitzig, a Bluemont resident and the Japan-America Society of Washington D.C.’s executive director, thinks that the phase out will make the county look less dedicated to the creation of a sister city.

“Whenever sister cities or companies want to make a connection with a city or an area, they’re going to look at how much that area is internationalizing… how much of Japan they’re already focused on.”

He added that the society was willing to assist Japanese teachers at APS get the word out about the program and encourage more students to enroll.

Screenshot via Arlington School Board