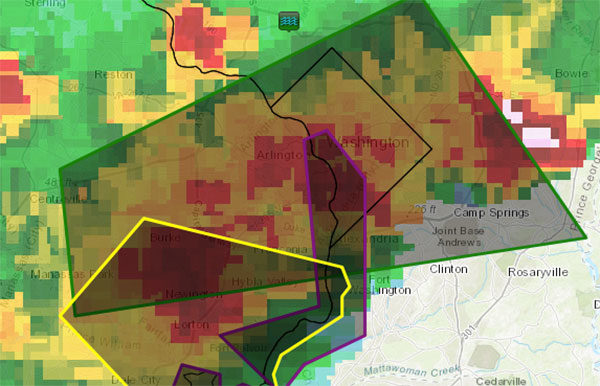 Update at 5:15 p.m. — As heavy rain continues to fall, high water has been reported on a number of roads, including: along Route 50; on Route 110 below Memorial Drive; at the intersections of Lorcom Lane and Lee Highway; Old Dominion Drive and N. Thomas Street; and at the intersection of N. Quantico Street and 26th Street N.

Update at 4:45 p.m. — The National Weather Service has issued a Flood Warning for Arlington and surrounding areas.

* At 443 PM EDT, Doppler radar indicated thunderstorms producing  heavy rain which will cause flooding. A quick inch or two of rain  will be possible on saturated ground.

Excessive runoff from heavy rainfall will cause flooding of small creeks and streams, urban areas, highways, streets and underpasses as well as other drainage areas and low lying spots.

Earlier: Arlington County is under a Severe Thunderstorm Watch through 9 p.m. tonight (Tuesday).

As of 4:15 p.m. a line of storms was heading toward the county from the northwest, bringing with it heavy rain and lightning.

Read more →
More Stories
With Budget Cuts on the Way, Arlington Libraries Looking for Feedback on Services to SaveJust Reduced Properties in Arlington