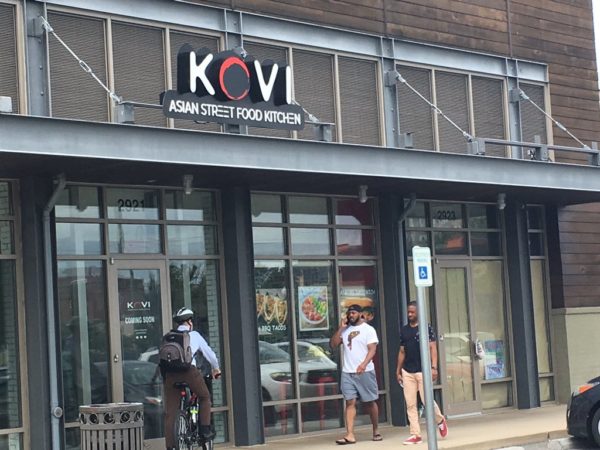 A new fast casual restaurant offering all manner of Asian street eats is opening up this month in the Arlington Ridge Shopping Center.

Kovi Asian Street Food Kitchen will hold its grand opening on June 30, with a soft opening set for sometime in the “next few days,” lead chef and owner Vi Nguyen told ARLnow. The eatery will be located at 2921 S. Glebe Road, once the site of longtime restaurant the Arlington Diner.

“This location just fit our wheelhouse,” Nguyen said. “There aren’t a lot of unique food options in the area for local residents… and because we promote healthy lifestyles, it’s such a good match to have a Gold’s Gym close by.”

While healthy eats are indeed a focus for Nguyen, he says his main pitch to diners is simple: “I make tasty food.”

He’s run a food truck bearing the same name for the last few months now, serving up dishes like Korean barbecue tacos and Vietnamese banh mi sandwiches throughout Northern Virginia. Nguyen says he’s even started offering poke bowls recently, and he plans to keep experimenting with “nontraditional tacos” at his first storefront — octopus tacos are one of his newest offerings.

Take a sneak peek into our new restaurant. We're just a few days from opening our doors!#kovirules #kovifan #kovilove…

Nguyen, who’s worked as a chef at both fine dining establishments and casual eateries around the D.C. area, says the Arlington Ridge location won’t be the only Kovi in the area. He already has a lease set for a location in Leesburg, and he’s envisioning opening “four to eight more” restaurants in the near future.

“Our plan for growth is very aggressive,” Nguyen said.

But first, Nguyen is planning on offering up plenty of promos at his Arlington store as the soft opening gets going, like giving some of the first customers to swing by Kovi free lunch for a month.

Nguyen’s new restaurant takes the place of a 32-year fixture in the shopping center. Arlington Diner closed last May, with its owner citing struggles in keeping up with the rent in his decision to move on.

Fairfax-based District Dumplings will be moving in next door to Kovi, taking the place of a Domino’s location in the shopping center. It initially appeared as if District Dumplings would be taking over the Arlington Diner space, but Nguyen stresses that Kovi is not affiliated with that restaurant.

END_OF_DOCUMENT_TOKEN_TO_BE_REPLACED

More Stories
ART Hoping to Get Service Back to Normal After a Week of Delays, Though Some Problems PersistCrystal City Pop-Up Library Could Stay Open Through End of 2019