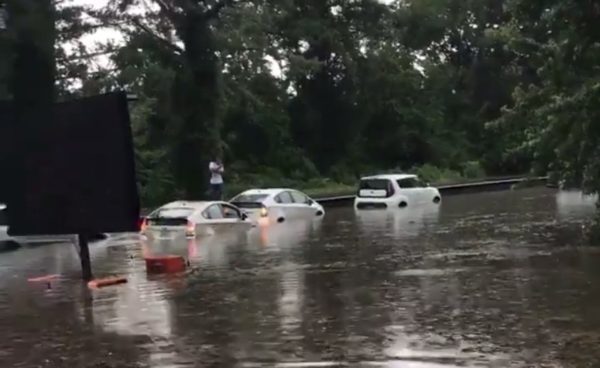 There may be yet more rain in the forecast, fresh on the heels of last month’s persistent storms, but don’t expect to see the sort of flooding that trapped dozens of people in their cars on the GW Parkway two weeks back.

That’s the word from National Park Service officials, who believe the waves of water covering the parkway back on July 17 were more a fluke than anything else.

The flooding, which impacted a stretch of the road as it winds past Reagan National Airport, was severe enough to strand about 25 cars on the parkway until firefighters could get them to safety. But the NPS doesn’t see much it can do to prevent that sort of flooding from happening again, simply because parkway officials believe it was largely a result of the extraordinarily rapid rate of rainfall.

#Breaking: 20 plus vehicles with water up to their doors on GW Pkwy at Reagan Airport. Avoid GW PKWY!!! pic.twitter.com/61BaHuyroQ

Jonathan Shafer, a NPS spokesman, noted that meteorologists recorded more than 2.6 inches of rain per hour falling at the airport that day.

“Maintenance staff from [the parkway] think the drainage system there was overwhelmed by the large amount of runoff,” Shafer told ARLnow via email.

Shafer added that parkway “[does not] believe this area has flooded due to rain in recent memory,” though water main breaks have occasionally caused some problems north of the airport.

Warren Stewart, a 22-year resident of Northern Virginia, agrees that he’s never seen the parkway look as it did two weeks ago. He was driving toward D.C. to pick his son up from school on July 17 when he saw what looked like “a creek coming down the road.”

“From my truck back, it was not flooded and the cars in front of me were,” Stewart said. “They were bailing water out of their cars with buckets… Water rose up as high as their tail lights, for some of them.”

The parkway hasn’t experienced anything like the mid-July flooding since then, even as rain has continued to pound the region. That’s why Shafer thinks the best solution to avoiding any similar scary situations on the parkway is for drivers to “exercise caution” getting on the road when storms pick up.

“Conditions can change fast, and it’s hard to predict when and how the weather might affect them,” he wrote.

Shafer says the park service is hard at work studying drainage and stormwater management improvements on other sections of the parkway, though construction is likely years away.

END_OF_DOCUMENT_TOKEN_TO_BE_REPLACED

More Stories
Crime Report: Peeper Peeps Through Cracked DoorBoring Title: The Hardest Part of Our Business Which Likely is the Same for Many Others