The developer behind Ballston Quarter is now promising a grand opening late next month, a minor departure from the September date originally targeted for the revamped Ballston Common Mall to begin welcoming customers once more.

Forest City is now targeting Oct. 25 for the development to open its doors “barring any unforeseen delays,” Forest City Regional Director of Marketing Jill Fredrick told ARLnow, via a PR rep. The bevy of restaurants and retailers set to call Ballston Quarter home won’t open all at once, but on a “rolling basis” over the next nine months, Fredrick added.

The overhauled mall has been in the works for years now, as Forest City has sought to refresh the aging structure with a mix of retail, office and residential space. But the exact timetable for its completion has been difficult to pin down, with the developer reporting some construction delays to county officials over the past few months.

“You’ve got to look at the magnitude of this project — it only slipped a month,” said Ballston Business Improvement District CEO Tina Leone. “Of course, we would’ve loved to have had a huge grand opening, but at least they’re opening.”

Leone and county leaders alike view the development as a critical one as Ballston continues to become an ever-more-urban section of Arlington — as she puts it, it will help transform Wilson Blvd into a “truly a retail street” and the neighborhood as a whole into “an 18-hour community.”

Yet the massive amount of construction required for the project, running in tandem with a host of other major Ballston developments, has snarled traffic in the area and forced visitors to the businesses that have remained open in the mall to wind through a confusing maze of scaffolding and tarps. Accordingly, Leone is quite anxious to see things start to wrap up on the site.

“There will be a critical mass of things starting to open in the fall, and then by the spring, end of the second quarter, it’s going to be up and rolling,” Leone said.

By the Oct. 25 opening, Fredrick expects that the mall’s “public areas will be fully open and accessible to the public, including vertical transportation elements like the escalators and elevators.” Leone says that will include clear ground-floor entrances along both Wilson and N. Glebe Road, as well as some big improvements to the mall’s parking garage.

“The elevator banks are going to match up with the floors in Ballston Quarter, instead of having to go up and down the stairs, and there will be more escalators,” Leone said. “It’s going to be more open, so you can actually see where you’re going and where the parking garage is. The connectivity is going to be much better. It couldn’t have gotten much worse, right?”

She added that sidewalks along Wilson will also be wider for people walking to the mall by the time it opens, which will help the development accommodate outdoor seating for a variety of its restaurants. The County Board is set to give the go-ahead for the new patios to open next week, when it could grant permits to establishments including Compass Coffee, South Block, Ted’s Bulletin, True Food Kitchen, Union Kitchen and Bartaco.

Leone also noted that the CVS pharmacy, which has remained open during the construction, will be accessible from both the Glebe and Wilson sides of the mall. And for fast food fans, she fully expects that the reopened Chick-fil-A will start serving customers by the time development opens.

Inside the mall itself, Leone hopes that the “wayfinding is going to be very, very clear” to help shoppers navigate the new space. Fredrick says construction will be ongoing even after the development opens, but she expects it will be “limited to the interior of tenants’ space and will not interfere with overall public access.”

Crucially, Leone says the new “plaza” at the center of the development should be open by the time fall rolls around, and she hopes to start working with Forest City to schedule activities and events in the space through the winter and spring.

One feature the area will be missing, however, is are the “large media screens” the developer originally proposed for the plaza. Attorney Evan Pritchard says the developer had hoped installing two LED screens there would “be an interactive and fun element to help activate the plaza,” but has since determined that they might not be allowed under county zoning rules. 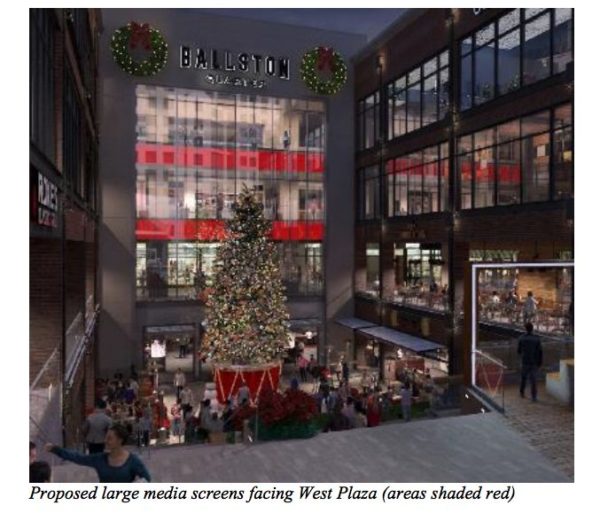 Forest City is asking the Board to drop its request for the screens at its meeting Saturday (Sept. 22), though Pritchard expects to pursue a change to the county’s zoning ordinance to allow them in the future.

“We hope to have Board support on that,” he said.

With or without the screens, Leone hopes the plaza will be a natural “entrance into the market area,” a 25,000-square-foot food court home to 18 restaurants. She expects that will open by November, as will Punch Bowl Social, a bar offering a bevy of games and entertainment options.

As for the rest of the offerings at Ballston Quarter, Leone hopes to see everything open by spring 2019. But half the battle will be the mall finalizing tenants for its remaining open space — Fredrick said three quarters of the development is already leased, with “additional deals in the works.”

“It’s just a matter of getting everyone into their spaces,” Leone said.