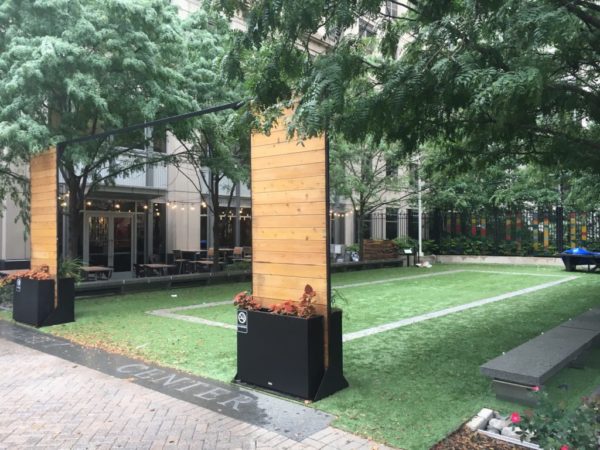 As Arlington has been drenched by unrelenting rain over these last few months, with totals setting all manner of records for the the D.C. region, local bars and restaurants haven’t exactly been flooded with business.

Owners at a variety of Arlington eateries, particularly those with outdoor patios or beer gardens, say August and September have been especially challenging months when it comes to convincing patrons to brave the elements.

And considering that the Washington area has seen the fourth-highest rain total for any September on record, and D.C.’s rainfall has even managed to outpace notoriously soaked cities like Seattle and London so far this year, those struggles are far from surprising.

“It’s been hard, for sure,” Scott Parker, the co-owner of local bars like Ballston’s A-Town and Clarendon’s Don Tito, told ARLnow. “Rain doesn’t exactly make people want to go out. August is one of the slowest months for most restaurants and bars in the area as is. Last thing you need is for it to be rained out.”

Curt Large, the owner of Rosslyn’s Continental Beer Garden, says things have been especially challenging for his establishment, which “lives and dies with the weather.” Though he also owns the adjacent Continental Pool Lounge, and often encourages patrons dodging raindrops to head indoors there, he says the inescapable fact is that “many, if not, most of the beer garden’s customers are looking to sit outside.”

“In July, we actually had higher sales than last year, but in August and September we’ve had rain on many Thursday and Fridays, by far our biggest nights, and our sales are down for this period more than 25 percent versus last summer,” Large said.

Ryan Cline, the general manager of Ballston’s Rustico, lamented that the rain “has taken away some of the last remaining weeks we have to use the patio sections on either side of the restaurant,” as well as the small beer garden the restaurant opens on weekends.

Considering that Rustico has “one of the largest outdoor patio sections in the area,” in Cline’s estimation, the weather has eliminated one of the restaurant’s distinguishing factors for customers.

All that being said, of course, Arlington restaurateurs say rain is part of the business, even if these last few weeks have been more brutal than usual. As Devin Hicks, the co-owner of Westover Market and Beer Garden, puts it: “It’s the weather, so what are you going to do?”

“Being in business for nine years, we’ve learned to roll with the punches,” Hicks said.

Hicks added that, like Large, having an indoor “beer haus” helps give customers another option when the rain picks up. He’s also erected canopies throughout the establishment’s beer garden, which have proven “clutch.”

Luckily, Hicks said that the “support from the neighborhood has been amazing,” even with the constant showers.

Similarly, Cline added that “it has been our local troopers really carrying the burden” over the wettest months, dubbing many of Rustico’s guests “fiercely loyal.”

There is one small bit of good news, however — this weekend’s forecast is looking like a far cry from the past weeks’ downpours.

“It sounds like the weekend is going to be a picturesque early fall weekend of weather,” Hicks said. “We keep pouring great brews no matter what Mother Nature throws at us.”