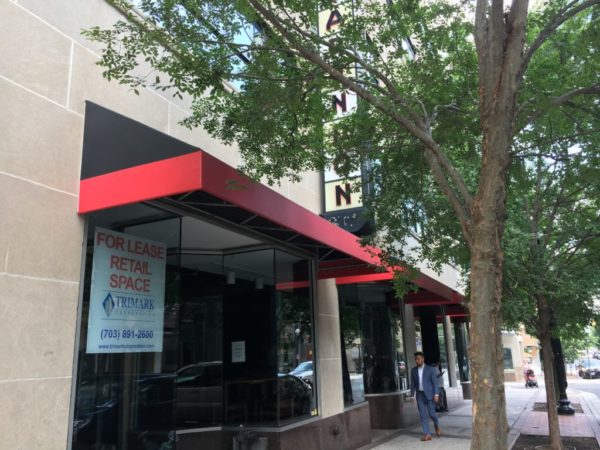 Clarendon Grill is closing at the end of the month, the longtime Clarendon nightlife spot announced today (Monday).

Long a venue for live music, Clarendon Grill (1101 N. Highland Street) first opened in 1996. Its interior and back patio were both renovated in 2010.

In a Facebook post, the bar thanked its customers for its more than two decades in business. 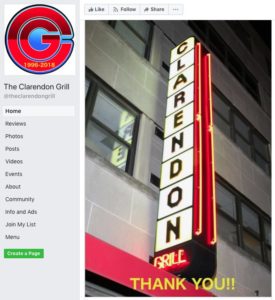 “When the Grill first opened there were few bars and fewer customers. As Clarendon grew in popularity, so did The Grill. We were extremely lucky to have had the opportunity to be a part of a community that has since blossomed into a vibrant collection of local businesses,” said the post. “Thank you all for your support over the past 22 years.”

ARLnow reported in August that “for lease” signs were posted on Clarendon Grill’s windows. The last event currently posted on the bar’s website is a Halloween party scheduled for Saturday, Oct. 27.

Also via social media, prolific local restaurateur and businessman Scott Parker, whose venues like Don Tito and The G.O.A.T. competed with Clarendon Grill, lauded its contributions to the local nightlife scene.

“Congrats to them and their team on an absolutely amazing 22 year run,” Parker wrote. “People outside the industry often have no idea the true blood, sweat, and tears that go into running an establishment. 22 years in business is no small feat. Absolutely amazing! I’m thankful for what they have brought to Arlington, and how they paved the way for more bars and nightlife to come in.”

It is unclear at this point what may be taking Clarendon Grill’s place.

It’s been an amazing ride. Our hearts are heavy as we share that the doors of the Clarendon Grill will be closing for good at the end of October. We were not ready, but sometimes things happen to change the course.

Some of you were around when the doors of the Clarendon Grill first opened back in the 1996 and some of you may not have been born yet. Either way we have truly enjoyed being the go to place for live music in Clarendon. When the Grill first opened there were few bars and fewer customers. As Clarendon grew in popularity, so did The Grill. We were extremely lucky to have had the opportunity to be a part of a community that has since blossomed into a vibrant collection of local businesses.

One of the most unique aspects of the Clarendon Grill is the staff. From our General Manager, to our bus boys, to our bartenders-the staff has remained the same for close to 20 years. That is a reflection of the unique culture and values that went well beyond a typical neighborhood bar. The Clarendon Grill was not just burgers, beers, and live music; it was a family to it’s staff and a “Night Out” for the community.

One of the many things we can be thankful for is all of the memories we have helped create, whether happy, funny, sad or forgettable (purposely or not). Thank you all for your support over the past 22 years.

It’s been a great run, but alas all good things must come to an end. There will be other bars, but none quite like the Clarendon Grill. Some things are replaceable like burgers and beers, but other things are intangible and we will argue that the staff and the experience we provided, will not be matched.

END_OF_DOCUMENT_TOKEN_TO_BE_REPLACED

More Stories
Legal Insider: The Statement of Reasons Leading to Security Clearance DeterminationsLegal Review: Research Offers New Hope for Those That Have Been Paralyzed