There’s some cool stuff going on inside Two Six Labs, a security technology company based in Ballston.

Two Six Labs works in research and development, primarily with the Department of Defense and other government agencies like DARPA. The company’s offices are a mix of segmented workspaces and mechanical workshops.

The company was founded in 2010 as tech company Invincea’s lab group. The group moved to Ballston in 2013 to be closer to the government clients. In early 2017 the group broke away from Invincea and took on its new name. 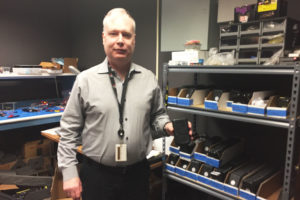 One recent example is Sigma, a low-cost radiation monitoring device. Greamo referenced the unexploded pipe bombs sent across the country last week and said his nightmare would be a radiological version of those bombs. Greamo said enough of them scattered across a wide area can provide a comprehensive net of coverage to catch those types of threats

“Imagine if every police car could monitor for those types of threats,” said Greamo.

DARPA’s contract with Two Six Labs also allows the company to retain the rights to their products, meaning Sigma will soon be commercially available to hospitals or large stadiums.

There was talk that DARPA might leave Ballston, but when the organization stayed Two Six Labs doubled down on their presence in the area. Greamo said the group had continued to grow and expand at its current location on the fourth floor of The Ellipse (4350 Fairfax Drive) but eventually reached a point where they were too large for the building.

The group has also expanded across the country, with offices in Mount Laurel, San Antonio, Austin and Tacoma, but Ballston remains the central location for the company. Greamo also said the group is hoping to expand in the region and is looking for a new office in Northern Virginia because many employees are finding the commute untenable. Greamo said the group is looking at Reston in particular, likely avoiding Tysons because of the area’s reputation for heavy traffic.