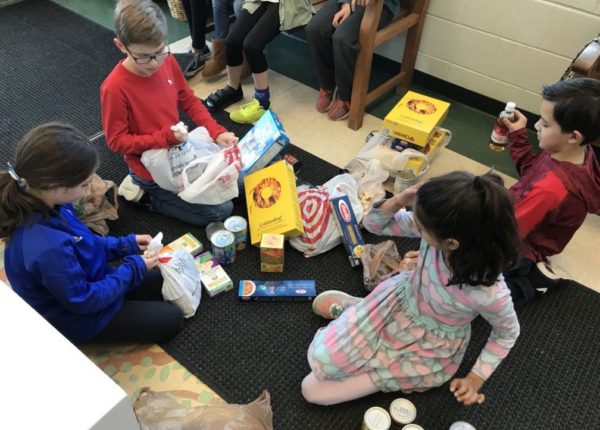 Democrat Matt de Ferranti wants to end child hunger in Arlington if he wins a spot on the County Board next week, and he says he can achieve that goal in the next four years.

In debates, campaign mailers, and his official platform, de Ferranti has pledged to ensure that no child in the county goes hungry by the time his first term on the Board would be up in 2022.

It’s a target that some observers think Arlington can meet, but gives others pause. And, crucially, it’s a key area of difference between de Ferranti and the man he’s hoping to unseat: independent John Vihstadt, the first non-Democrat to sit on the Board since 1999.

Both of the contenders for the lone Board seat on the ballot this fall want to reduce hunger in the county, of course. Yet the pair differs on how to achieve that goal, and how much the Board should prioritize it in the first place, providing a clear contrast between candidates who otherwise broadly agree on many of the pressing issues facing the county.

“The differences between me and my opponent are not always in votes, they’re often in agenda and focus,” de Ferranti told ARLnow. “I think we have to call Arlingtonians to be committed to this equity and be a caring, compassionate community on hunger in ways that we haven’t been called to until this point.”

Vihstadt and de Ferranti agree that the county could use more data on hunger and food insecurity in Arlington, and say they’d support a new study of the matter. The Arlington Food Assistance Center (AFAC) teamed up with Virginia Tech to release a paper on the matter back in 2012, and both Board contenders are eager for an update to that document.

Yet the incumbent admits to being a bit puzzled that de Ferranti is bringing up the issue so frequently in the first place, and would much rather wait for more information before acting.

“He is the only one who’s talking about critical gaps in child hunger,” Vihstadt said. “I haven’t heard an explanation of why we’re doing this by 2022 and why we’re only talking about child hunger versus senior hunger. He’s raised a good issue, but I would want to see more analysis on this.”

De Ferranti says he’s so focused on child hunger, specifically, because research links food insecurity to stunted development among children, and suggests that kids learn less if they come to school hungry. But he’s also relying on data from AFAC, the most prominent Arlington nonprofit focusing on hunger, claiming the numbers demand urgent attention to child hunger.

“The question to the county is always: what’re your priorities?” Meng said. “It’s not always the government’s responsibility, but better support and coordination would go a long way to solving this issue.”

Meng believes that de Ferranti is absolutely correct that the county could effectively cut the number of hungry kids to zero within the next few years, “especially if the coordination and the desire to is there.

On that front, Meng thinks a good place to start would be sending AFAC more money each year.

The county currently allocates about $478,000 annually to help the nonprofit stay afloat, but Meng says AFAC largely depends on private donors to afford its roughly $7.5 million yearly operating budget. For the last two years, the county tacked on an extra $50,000 in one-time funds to send to the center, but the Board declined to do so this year amid a tight budget crunch.

Meng says he hasn’t needed to cut back on any of his programs after losing out on that money, but he has had to work a bit harder to fundraise to make up the difference. He believes that restoring that money, and even sending AFAC a bit more, would make a huge difference in helping the nonprofit identify hungry kids and reach them.

De Ferranti says he strongly disagreed with the Board’s decision not to send AFAC the additional funding. Even in a challenging budget environment, he argues “we should not be cutting back when the need in terms of the number of families per month has not decreased.”

Vihstadt is sympathetic to Meng’s case, but points out that AFAC already receives more county financial support than most nonprofits in Arlington. Similarly, he said the Board decided not to tack on any more funding in this year’s budget because members trusted in Meng’s fundraising prowess.

“There are nonprofits who are struggling and who do great work: AFAC is not one of them,” Vihstadt said. “I know he used that $50,000 reduction as an opportunity to raise money. I would love to know how much he raised as a result.”

Others working on the issue of child hunger across the state wonder if a focus on services in county schools might be the surer way for Arlington to reach de Ferranti’s goal.

Claire Mansfield, the director of No Kid Hungry Virginia, says her organization largely focuses on making sure schools offer “healthy, nutritious” meals for breakfast and lunch, as that’s generally the easiest way to reach kids who might not know where their next meal is coming from at home.

She’s particularly interested in making sure that schools not only serve a healthy breakfast, but do so as part of the regular school day, which can “remove the stigma” around students looking for a free or reduced price meal.

Mansfield points out that some, but not all of Arlington’s schools offer breakfast in the classroom — Arlington Public Schools spokesman Frank Bellavia says Randolph Elementary, Oakridge and Hoffman-Boston all do so, though Randolph only offers it to preschoolers and kindergarteners.

Mansfield says expanding such programs can have a huge impact, and that Oakridge has already seen a difference since starting breakfast in the classroom. According to her data, only 24 percent of students at the school eligible for free and reduced lunch ate breakfast in the 2014-15 school year; by last year, that number was up to 85 percent.

She added that schools can be key destinations for hungry kids looking to receive meals over the summer. Bellavia said the school system set up nine such “summer meal sites” this year, and Mansfield believes such options are a key way to fill in “gaps” in reaching families in need.

However, she’s a bit more hesitant than Meng to declare that simply following her prescriptions could definitively end child hunger in the county.

“I’m not one to put a timeline on that per se; if I could do it tomorrow I would do it tomorrow,” Mansfield said. “It’s just a case of making a commitment and saying, ‘We know how to solve this and we’re going to do what it takes.'”

Meng says he’s more than willing to do more work with county schools — in fact, one of his priorities is to expand AFAC’s “summer backpack program,” partnering with schools to reach hungry kids when class isn’t in session.

But to do so, he needs more money, and he says that’s where the County Board’s leadership matters on this question.

“We hear all the time, ‘Where are these people who need food?'” Meng said. “All you have to do is look around. Where do you think these people come from who are washing your dishes, doing your laundry, getting paid $7.25 an hour? We have them in this community. But we may not very long.”