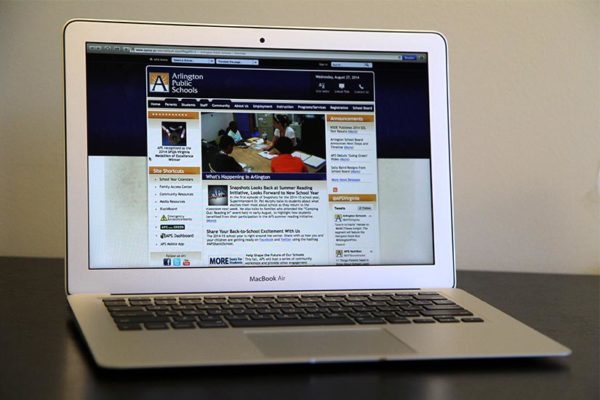 Some parents are fuming over the school system’s decision to charge them for damage to school-issued laptops and tablets this year, arguing that officials shouldn’t pass along the costs of a mandatory program for students.

The School Board agreed to a policy change ahead of this school year, stipulating that parents could be charged if officials see any “intentional or negligent” damage to a student’s device. All county elementary and middle school students are currently issued iPads, while high schoolers receive MacBook laptops, as part of the “1:1 device” program the school system first kicked off in 2014.

Arlington Public Schools still takes responsibility for “routine maintenance or standard repairs” to school-owned devices, under the terms of its “acceptable use” policy. But the school system does reserve the right to charge parents hundreds of dollars for substantial repairs, or replace a lost device.

“People were concerned about the expense at first, but everyone told us: don’t worry, you’re not going to be liable for these,” Danielle Werchowsky, the parent of a sophomore at Yorktown High School, told ARLnow. “A lot of us didn’t ask for these pieces of equipment… but APS chose this path and they should have to figure out how to fix it and how to pay for it, not charge us.”

APS spokesman Frank Bellavia points out that the Board approved such a change back when it was still setting a new budget back in May, in order to “reduce the number of devices being damaged.” The issue has bubbled up now, however, largely thanks to an email from the Yorktown Parent Teacher Association sent out Monday (Dec. 3) laying out the exact cost of repairs.

Werchowsky says many parents were completely unaware of the size of these fees until that email went out (though they are posted on the APS website), and they felt a bit of sticker shock. A “complete replacement” of laptop could cost anywhere from $634 to $734, for instance, while an iPad would cost a family $279.

“I just got a bill for $100 for repairs to my son’s iPad,” Val Steenstra wrote in a Facebook post on the matter. “He pulled it out of his backpack and the screen was glitching. No discussion of fault. No questions about if he did something to damage it. Just a bill.”

“These kids have their laptops for four years, but there’s no depreciation taken into account here, you’re still paying $700,” Werchowsky added. “These aren’t like a home computer where it’s in one spot… And their frontal cortex aren’t necessarily fully developed, they lose things. My son would forget his coat if I didn’t remind him.”

Yet Bellavia notes that only 3 percent of all the school system’s devices are lost, stolen or damaged each year — and even then, “the most common occurrence” is a lost charger. For iPads, replacements for those cost $27: for MacBooks, it’s $53.

Bellavia adds that APS is “self-insured,” so the school system is only charging parents “the actual costs APS pays to have the repairs made.” Given the tight budgets the school system has been facing recently, officials are particularly eager to find ways to defray any costs they can.

“The self-insurance covers the costs to repair accidental damage and situations where the families are unable to pay the full cost of the repair,” Bellavia wrote in an email.

But Werchowsky and many of her fellow parents argue that any fee is too high, considering that they harbor serious concerns about using the devices in the first place, making the potential costs all the more frustrating. Some Arlington parents have managed to collect hundreds of signatures on a petition urging APS to to cut back on how often young students are exposed to the devices — the Board itself has even considered moving to a “2:1” or “4:1” device policy for elementary students, as a strategy to control costs and reduce screen time for younger kids.

“It’s not that I’m anti-computer, but I just don’t think a lot of it has been well thought out,” Werchowsky said. “You really can’t opt out, even if you have screen addiction concerns.”

Yet Bellavia notes that concerned parents do have some options, even if the devices will remain a key component of APS curricula moving forward.

“During the school day, teachers build lesson plans with the knowledge that every student will have their device to use as appropriate to support their learning,” Bellavia said. “Families which have concerns that the device might be damaged outside of school hours can request that the device be kept at school.”