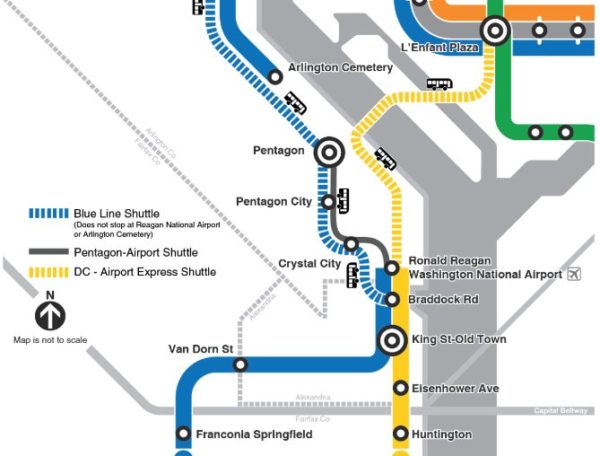 Metro is shutting down three Arlington stations on the Blue and Yellow lines this weekend, in order to allow for some major lighting improvements set to make each station substantially brighter.

The Pentagon, Pentagon City and Crystal City stops will all be closed both Saturday and Sunday (Jan. 12-13), WMATA announced last week, work that is sure to create substantial disruptions on both lines.

Metro plans to run Blue Line trains on its regular weekend schedule between the Franconia-Springfield and Reagan National Airport stations and between Arlington Cemetery and Largo Town Center each day, with free shuttle buses providing a bridge between the closed stations. After the cemetery closes at 7 p.m. each day, Blue Line service will end at the Rosslyn station.

As for the Yellow Line, Metro expects it will only run trains between the Huntington and National Airport stations, with free shuttle buses on that line too.

The exact details for the shuttle buses are as follows, per a WMATA press release:

Metro is warning anyone hoping to use the rail service and shuttle buses to allow an extra 30 minutes of travel time to reach their destinations this weekend.

Officials chose to kick off work this weekend because they’re counting on “lighter post-holiday travel” patterns, easing demand for service reaching DCA. Metro made a similar assumption back on Veteran’s Day in closing the National Airport station, only to see huge traffic snarls as frustrated commuters turned to the roads instead.

This latest construction project is aimed at installing new LED lights in all three stations, part of a $50 million project that involves lighting upgrades at all of Metro’s 48 underground stations. WMATA says that stations generally become about six times brighter after the new lights are installed.

The troubled transit system remains beset by questions of how to best complete needed track work while improving service and luring riders back to its trains. Metro leaders are proposing some key rush hour service increases in WMATA’s new budget, but it remains an open question whether Arlington and other Virginia localities will be able to help pay for those changes.