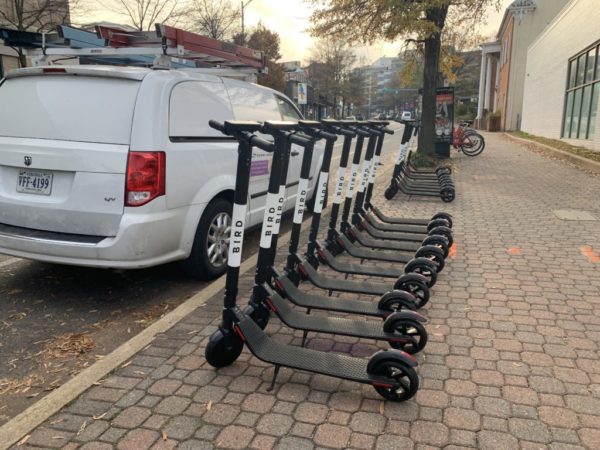 New legislation working its way through the General Assembly could set new state standards around dockless scooters and e-bikes, giving localities like Arlington full authority to ban the vehicles on sidewalks and regulate where they’re parked.

A bill from Del. Todd Pillion (R-4th District) unanimously cleared the House of Delegates Monday (Feb. 4), setting the stage for state lawmakers to pass their first regulations governing the devices since they began popping up in Arlington and other urban communities around the state last summer.

The legislation shouldn’t change much about the county’s current dockless vehicle pilot program, which the County Board created last fall to set new standards guiding the use of the suddenly ubiquitous scooters. But the bill would codify into state law many of the regulations the county has already created as part of the program.

Perhaps most notably, the legislation would allow people to ride scooters and e-bikes on sidewalks, unless a local ordinance specifically bans the practice. The county has barred scooters from both sidewalks and trails as part of the pilot, and this bill would allow Arlington to take the next step and pass its own law doing so once the program wraps up.

“Under this, we can have the ability to adopt an ordinance that takes care of all of our specific issues,” said Pat Carroll, the county’s main lobbyist in Richmond, during a Jan. 29 House committee hearing on the bill.

The legislation also bars scooter and e-bike riders from parking the vehicles “in a manner that impedes the normal movement of pedestrian or other traffic or 456 where such parking is prohibited by official traffic control devices,” another key headache for county officials. Arlington staff have set up some “scooter corrals” around Metro stations to encourage the orderly parking of the devices, but otherwise don’t have the ability to enforce where the vehicles are parked beyond bringing complaints to each company individually.

The legislation also caps all scooters at a top speed of 20 miles per hour — Arlington currently mandates a speed cap of 10 miles per hour, which initially irked some owners of the vehicles who’d hoped to use a 15-miles-per-hour cap instead.

Finally, the bill gives other localities until Jan. 1, 2020 to set up their own pilot programs for the dockless devices — once that date passes, companies will be able to deploy the scooters and bikes without abiding by any sort of pilot, much as Bird did when it dropped its scooters in Arlington back in June.

In general, the scooter companies seemed broadly pleased with the legislation. Lobbyists for several dockless vehicle companies spoke in support of it at the Jan. 29 committee hearing, and the firms were certainly well represented in Richmond — state records show that Bird has hired five lobbyists on its behalf, while Lime has three, Lyft has two and Uber (which owns Jump scooters) has six.

“We know for a lot of folks it’s a complicated issue around a new and emerging technology and we look forward to continuing to work with all legislators and stakeholders,” said Ryan O’Toole, a lobbyist representing Lime.

The legislation now heads to the state Senate, where lawmakers have until the end of session on Feb. 23 to take action on the bill.

Should it clear that hurdle and head to the governor’s desk, it’s anyone’s guess who will be waiting to sign it — Gov. Ralph Northam is still facing an overwhelming chorus of voices calling on him to resign over revelations that a racist photo appeared on his medical school yearbook page, while new allegations of sexual assault against Lt. Gov. Justin Fairfax complicate any designs he might have on the governorship.