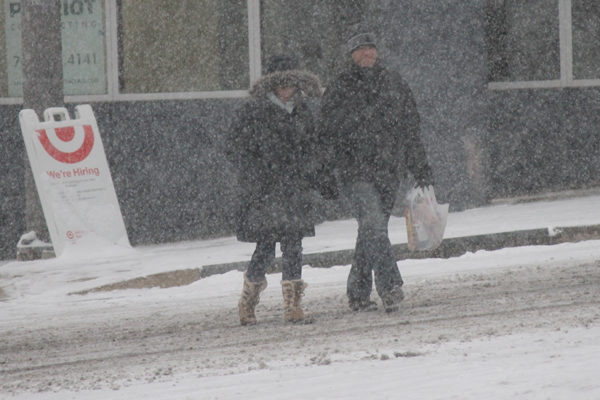 (Updated at 5:20 p.m.) Arlington Public Schools will be closed Wednesday due to expected snow and ice.

The school system made the call at 5 p.m. Tuesday, shortly after a similar announcement from Fairfax County Public Schools.

APS Operations Update for Wed, Feb. 20, 2019: All APS Schools & Offices Will Be Closed. All Custodians should report at 6 a.m. regardless of your regular shift. All Maintenance staff should report at your regularly scheduled time unless directed otherwise by your supervisor.

Arlington and the region is under a Winter Storm Warning for Wednesday, with 3-6 inches of snow expected. From the National Weather Service:

…WINTER STORM WARNING REMAINS IN EFFECT FROM 1 AM TO 7 PM EST WEDNESDAY… * WHAT…HEAVY MIXED PRECIPITATION EXPECTED. TOTAL SNOW ACCUMULATIONS OF 3 TO 6 INCHES AND ICE ACCUMULATIONS OF UP TO ONE TENTH OF AN INCH EXPECTED. * WHERE…THE DISTRICT OF COLUMBIA AND PORTIONS OF CENTRAL MARYLAND AND CENTRAL AND NORTHERN VIRGINIA. * WHEN…FROM 1 AM TO 7 PM EST WEDNESDAY. SNOW WILL OVERSPREAD THE AREA EARLY WEDNESDAY MORNING AND MIX WITH AND CHANGE TO SLEET AND FREEZING RAIN DURING THE LATE MORNING AND EARLY AFTERNOON HOURS WEDNESDAY. PRECIPITATION WILL CHANGE TO PLAIN RAIN WEDNESDAY EVENING. THE HEAVIEST SNOW IS LIKELY WEDNESDAY MORNING. * ADDITIONAL DETAILS…TRAVEL COULD BE VERY DIFFICULT. THE HAZARDOUS CONDITIONS COULD IMPACT THE MORNING OR EVENING COMMUTE. PRECAUTIONARY/PREPAREDNESS ACTIONS… A WINTER STORM WARNING MEANS SIGNIFICANT AMOUNTS OF SNOW, SLEET AND ICE WILL MAKE TRAVEL VERY HAZARDOUS OR IMPOSSIBLE. WHEN VENTURING OUTSIDE, WATCH YOUR FIRST FEW STEPS TAKEN ON STEPS, SIDEWALKS, AND DRIVEWAYS, WHICH COULD BE ICY AND SLIPPERY, INCREASING YOUR RISK OF A FALL AND INJURY. &&

The upcoming winter storm will transition through multiple precipitation types Wednesday into Wednesday evening before gradually ending. Travel conditions could quickly deteriorate Wednesday morning as the initial burst of snow moves across the area. pic.twitter.com/yeLiN35UJk

Arlington’s Dept. of Environmental Services says it has been pretreating roads and expects to have its “full response team” on the road shortly after midnight, before the first of the flakes starts falling.

Irksome roadway locations being pretreated today. Full response team forms at 12 am to focus on major roadways when tomorrow's expected event moves in. Plowing likely although temperatures will rise during the day, with forecast shift to rain. #ArlWX https://t.co/JnvPU3tlvu pic.twitter.com/LU0JsegOSX

The wintry weather is expected to prompt delays and cancellations at local airports, including Reagan National Airport, which is advising flyers to “check with their airline to confirm the status of their flight prior to coming to the airport.”

VDOT’s Northern Virginia office, meanwhile, is encouraging drivers to stay off the roads if at all possible.

VDOT asks that drivers plan travel around a winter storm bringing accumulating snow and a mix of frozen precipitation to the region throughout the day Wednesday. Avoid travel during the storm for safety, as well as after until road conditions improve.

Tonight, trucks will stage along roadways, ready to plow and treat roads as needed when the storm begins.

VDOT Asks Drivers and Residents To: