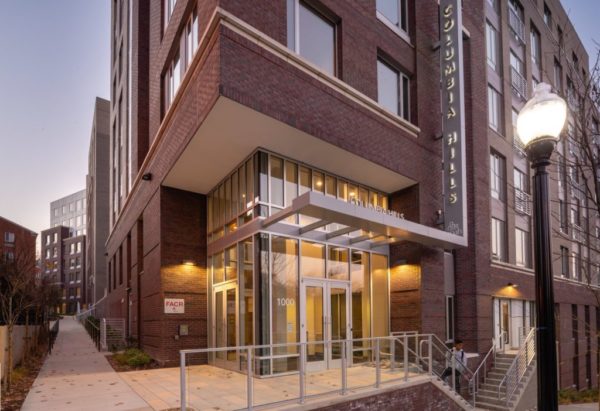 A new bill just passed by state lawmakers could soon allow localities like Arlington to start waiving many fees for new affordable housing developments, a change that advocates expect could have big impact on the county’s housing crunch.

New legislation backed by Dels. Lamont Bagby (D-74th District) and Alfonso Lopez (D-49th District) would let officials across the state pass ordinances to do away with any building permit fees or other local levies on affordable housing plans, in a bid to ease the construction of such projects.

The bill unanimously passed the state Senate last week, after earning similarly swift approval in the House of Delegates, and now heads to Gov. Ralph Northam’s desk for his signature. The legislation was designed as part of a broader package of bills aimed at bringing housing costs down, due not only to rising concerns about Amazon’s impact in Northern Virginia, but also to new research showing the Richmond and Virginia Beach areas with some of the highest eviction rates in the entire country.

“Every Virginian deserves a safe place to call home,” Bagby wrote in a statement. “By supporting more affordable housing, we can address the devastating impacts of Virginia’s high eviction rates.”

Michelle Winters, the executive director of the Arlington-based Alliance for Housing Solutions, told ARLnow that the county doesn’t currently waive fees for affordable developments, but could well embrace such a tactic in the near future.

She points out that a coalition of affordable housing advocates called for the county to take just such a step in a 2017 report outlining potential strategies for officials to meet their own goals for building more reasonably priced homes.

Arlington officials have already struggled to meet those goals for creating homes guaranteed to remain affordable to renters of modest means, known as “committed affordable” units, prompting housing advocates to pen the report and press for progress. And with Amazon bringing its 25,000 (or more) highly paid workers to the county, Winters believes its conclusions are all the more important for leaders to consider.

“The report estimated that waiving ‘permit and tap fees’ for affordable housing projects would save $1.4 million per year, or allow the addition of 16 more committed affordable units each year,” Winters said.

That would only be a small change in the grand scheme of the county’s housing needs — the county created or preserved 515 affordable homes last year, short of the 585 homes officials hope to produce each year — but housing researchers still expect waiving such fees would make a meaningful difference.

“Although the total amount of fees imposed by local governments during the development review process can vary by locality, affordable housing developments operate under extremely complex financing mechanisms and tight margins,” said Andrew Clark, vice president of government affairs for the Home Builders Association of Virginia, wrote in a statement. “Reduction or elimination of these local fees could be a significant incentive for a private-sector development considering an affordable housing development and could also help incentive the private-sector developer to re-invest those savings into amenities, building materials or labor.”

APAH spent about $91.1 million on the project in all, but that included close to $701,000 in fees including building permit fees, sewer and water levies and zoning review costs.

“If all of these fees had been waived for this affordable project, it would have reduced the costs of development, freeing up resources for the development of eight (8) additional [committed affordable units],” the advocates wrote.

The report also notes that other cities around the country have already adopted such a strategy. In Austin, Texas, for instance, the city waives fees on a sliding scale based on what portion of a development’s homes are priced to be affordable to people making less than 80 percent of the area median income.

Of course, it might be a tough pill to swallow for county leaders to forego any revenue while times are tough for Arlington financially.

But officials have seen some reason for optimism about the upcoming budget recently, and Winters says county workers have already assured her that they plan to examine the impacts of waiving affordable development fees as part of a broader study of Arlington’s permitting process.