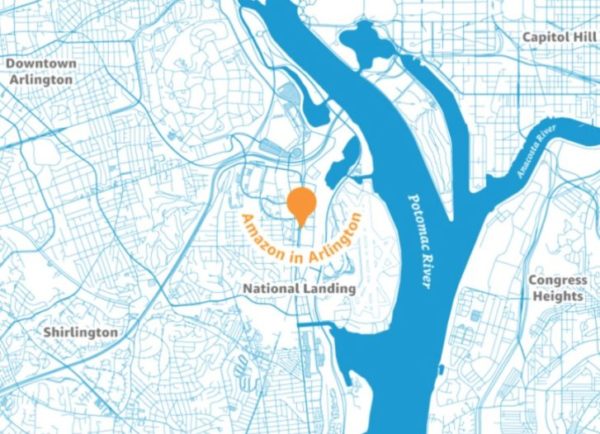 The following Letter to the Editor was submitted by Gary Shapiro, the president and CEO of the Consumer Technology Association (CTA), who writes in support of Amazon’s plans to open up a new headquarters in Crystal City and Pentagon City.

The Crystal City-based group lobbies on behalf of more than 2,200 consumer technology companies, Amazon included, and it has recently come out in strong support of the company’s vision for Arlington. Shapiro appeared at a recent forum of Amazon executives and regional leaders, and the CTA even organized a pro-Amazon demonstration at the event.

The County Board is set to consider an incentive package to formalize the company’s plans to move into Arlington next month.

When I first heard Amazon was considering coming to Arlington, I was thrilled – but not surprised. As head of the Arlington-based Consumer Technology Association (CTA), I can say with confidence there’s no better place for a major tech innovator such as Amazon than northern Virginia – and, for northern Virginians, there’s no better addition to the neighborhood than Amazon.

Working just across the Potomac from Washington, D.C. positions us to share our insights and input with federal leaders and other key influencers. Reagan National Airport is just minutes down the road, making travel a breeze. And top talent flows in and out of the region’s high-caliber universities, so we’re able to hire from the best of the best.

And those whom we do hire enjoy the benefits of living in this vibrant, connected area. Many commute via public transit, bicycle or even on foot. Arlington offers young employees exciting nightlife and cultural experiences, with some of the world’s top museums nearby. And parents can come to work with a free mind, confident their children are learning and growing in some of the nation’s premier public schools.

The choice was an obvious one for our company, and I’m glad it made sense to Amazon, too. But while I’m excited for Amazon, I’m keen to see the benefits the company’s arrival will bring to the area at large.

Amazon plans to invest $2.5 billion in Arlington for the new headquarters and create 25,000 jobs over the next 11 years. This will not only push the region to new heights of economic prosperity, but counterbalance the impact that 24,000 eliminated federal jobs has had on nearby Crystal City, Potomac Yard and Pentagon City since the early 2000s. And Amazon’s planned investment in the area spurred Virginia Tech’s announcement of an Innovation Campus in Potomac Yard, which will guarantee a top talent pipeline of STEM graduates for employers for years to come.

And Arlington County is proactively taking steps to minimize disruption to our streets, buses and Metro system. The county and the commonwealth have plans in place to expand transportation capabilities in the Arlington area. Five critical initiatives – updates to Route 1 in Crystal City, new entrances at the Crystal City and Alexandria Potomac Yard metros, additions to the Crystal City Potomac Yard Transitway and a new multimodal transportation system to National Airport – will be funded by the commonwealth.

Additionally, Arlington County has teamed up with Alexandria to propose $570 million in funding to make walking, biking, driving and traveling via public transit far smoother. Because of all the advance work to streamline traffic into Crystal City, locals should experience minimal disruption in their daily commutes.

This area is one of the most innovative and dynamic in the country. CTA’s Innovation Scorecard ranks states on the strength of their innovation economies, and Virginia has been named an “Innovation Champion” – the highest possible ranking – four consecutive times.

Virginia’s success stems from its embrace of new technologies and services, an emphasis on education, and high levels of entrepreneurial activity and tech jobs. The strengths that make Virginia great are the same strengths that make a game-changing global tech company like Amazon great.

And if those strengths are true of Virginia as a whole, they’re particularly true of northern Virginia. Each year at CES® – the world’s largest and most influential technology event –  northern Virginia tech companies make their mark, sharing their exciting new ideas on an international stage. The people who live here are forward-thinking, bold and creative – the kind of people who want to change the way the world thinks, works and lives, just as Amazon does.

Normally, the tech industry is an advocate for disruption. But when it comes to HQ2 and the innovation-rich neighborhood, I’m confident Amazon will fit right in.

ARLnow.com occasionally publishes thoughtful letters to the editor about issues of local interest. To submit a letter to the editor for consideration, please email it to [email protected] Letters may be edited for content and brevity.