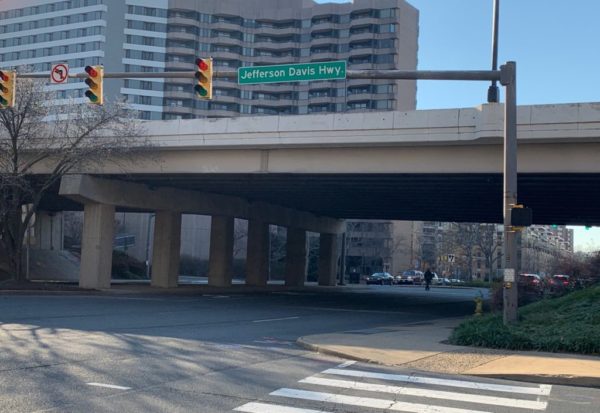 After years of unsuccessfully pushing for state legislation to allow it, the Arlington County Board can now just go ahead and pick a new name for “J-D Highway” and ask the Commonwealth Transportation Board to make it so, bypassing the change-resistant General Assembly.

Herring’s opinion came at the prompting of local state legislator Del. Mark Levine (D), who cheered Arlington’s newfound ability to request the removal of the Confederate leader’s name from the main thoroughfare through Crystal City and Pentagon City.

Thrilled that @AGMarkHerring, in a formal opinion to me, has confirmed that Arlington County can change the name of Jefferson Davis Highway without going through the Virginia legislature.https://t.co/d8hMUITCi1

County Board Chair Christian Dorsey told the Washington Post that he expects the Board to move forward with a renaming.

So what should Route 1 now be called as it runs through Arlington? The obvious option is Richmond Highway: that’s what it’s already called in Alexandria and what Google Maps has unilaterally decided to label it as of January.

Of course, there will also be those who think that Jefferson Davis Highway should remain named as such, for old time’s sake. And still others may want a completely different name — Jeff Bezos Highway, anyone? (Just kidding.)