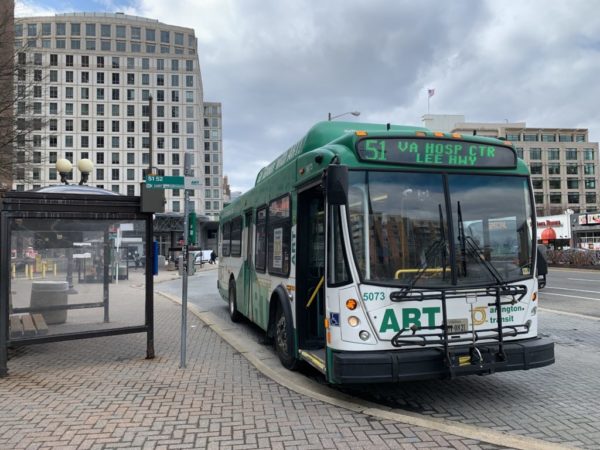 (Updated 10:05 a.m.) Arlington will soon release the results of a study on whether Uber and Lyft should replace some bus routes in certain areas of the county.

At the end of May officials are expected to conclude its “Parameters Study for Zone-Based Demand-Responsive (Flex) Transit Service,” per a county spokesman. The study will help officials weigh whether ride-hailing companies can replace some bus service in areas experiencing low bus ridership.

Ride-hailing services could connect riders heading to and from those areas with the nearest Metro station.

“We’re in the research phase right now, so no decisions have been made about [the] number of providers or where vehicles would pick up passengers,” Balliet said. “These would be looked at if we decide to move forward with this service concept.”

The areas being considered for this are identified in the county’s Transit Development Plan, which was approved in 2016:

“Each trip must either originate or end at that chosen destination,” the plan says. “This service will use smaller vehicles that may not be operated by or under the banner of ART and could include a separate fare system. Rides would be grouped and provided on a demand responsive basis.”

“In Arlington County there are several low-density neighborhoods which are served by low-frequency, low-ridership, costly-to-operate bus routes,” a 2018 description of the study says. “In these areas, it may be easier and cheaper to provide on-demand private-vehicle service for people needing to get to Arlington’s business and shopping districts than continuing to provide bus service.”

The county “sees this project as a potential model for other places which are facing similar issues with their bus systems,” said the study’s description.

County Manager Mark Schwartz said in a 2016 statement that the county’s “goal is to review a possible way to encourage transit ridership, increase efficiency and reduce costs,” and added that the county “must overcome many challenges and answer many questions before we could consider implementing this proposal.”

Montgomery County, Maryland is planning to test a similar transit program this summer where residents can request a shuttle pick-up using the Via app, WTOP reported.