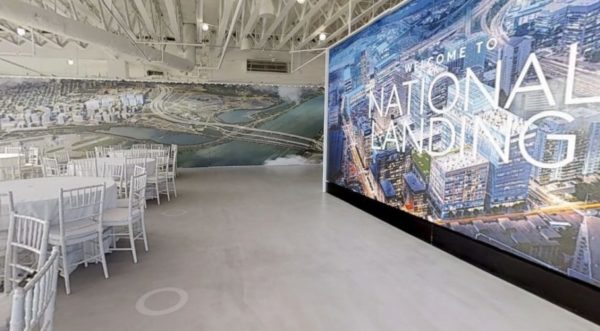 A virtual tour is now online of the room developer JBG Smith used to pitch Crystal City and Pentagon City properties to Amazon.

Shirlington-based real estate marketing firm Lyons & Sucher designed the space, calling  it “the room where it happened” and posted a virtual 360-degree tour on their website earlier this week.

“Typically people in a brokerage situation might hand you a powerpoint or a book or something. But this was super life size,” Jane Lyons of Lyons & Sucher told ARLnow. “And it created a very quick impression of how much we wanted the Amazon account and what we could do in a very short time and also how it could be kept up.”

The 20,000-square-foot space was located in the 12th floor of 1770 Crystal Drive — a building Amazon agreed to lease from JBG Smith earlier this month (and which is currently under construction). 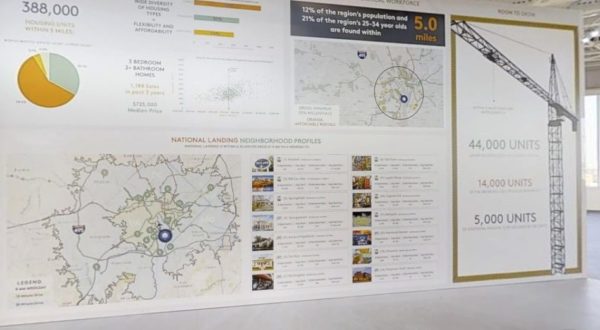 Lyons said Amazon executives visited the room three times over the course of 2018, and before each visit  JBG Smith directed her marketing firm to update the room to reflect the latest negotiations.

The third and final version of the room is the one shown on the firm’s website. It starts with a “Welcome to National Landing” mat and leads viewers around a series of freestanding, 10-foot-high walls with information about:

The space also features a 120-foot-long floor map of Crystal City that designers marked up to show different features depending on what JBG Smith wanted to highlight.

“It was fabricated to allow it to be updated,” said Lyons. “It was a huge print job.”

One of the other changes to the room was that the marketing firm was asked to switch out the individual building renderings along the main 64-foot wall with a 64-foot aerial image of Crystal City and its connections to Alexandria, the Potomac, and D.C.

“That one stayed up for the third visit,” she noted.

Lyons said she was not able to share the all details of the changes her firm made to the room or any still pictures, due to a non-disclosure agreement.

However, the space shown on the website offers some clues as to what Amazon found important. The floor map, for instance, notes the location of Metro stations, walking distances between certain buildings, a place for outdoor dining, and the site of a potential school. 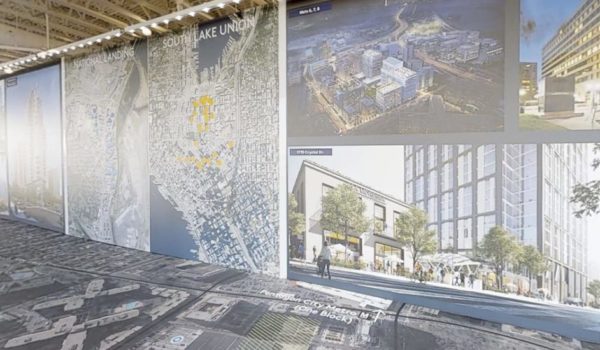 A spokesman for JBG Smith declined to comment for the story.

Earlier this month, the developer inked its deal with Amazon to lease three office buildings in Crystal City — 241 18th Street S., 1800 S. Bell Street, and 1770 Crystal Drive — and to sell a pair of large Pentagon City development sites to the company.

In March, the County Board cleared the way for Amazon to begin developing its second headquarters in earnest by unanimously approving a controversial package granting $23 million in incentives to the company if it meets certain hiring and occupancy benchmarks.

The Virginia General Assembly approved a $750 million state incentive package for the company this winter.

Arlington also pledged to fund $28 million in transportation upgrades near the planned headquarters, and to forward public records requests concerning Amazon to the company.

An Amazon spokesperson did not respond to requests for comment. 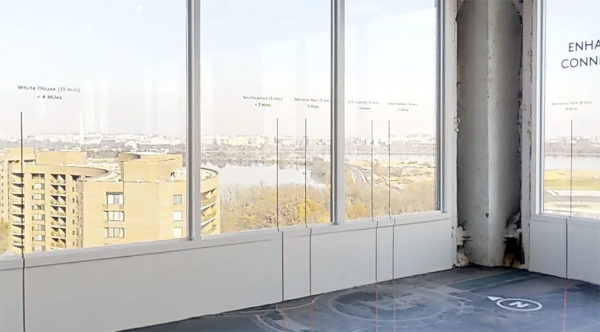 Lyons’ firm was asked to replace an aerial image showing connections to transit networks with a video showing building renderings along Crystal Drive; otherwise, the presentation to one of the world’s biggest technology companies was an analog one.

“When you are working to impress somebody who has the best tech ever they’re not going to be impressed by tech,” Lyons said, adding that that being able to physically interact with the space was “part of the magic.”

As for the room itself?