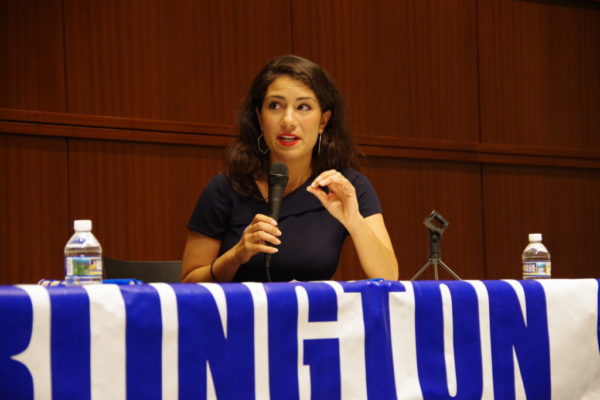 (Updated at 11:20 a.m.) Nicole Merlene, a Democrat challenging state Senator Barbara Favola (D), has become embroiled in a war of words with a self-described political meme account on Twitter.

The incident started with Merlene’s introduction at an Arlington Young Democrats forum.

“As a renter, as someone who completely relies on public transportation because they can’t afford a car, as someone who had to pay out of state tuition for college, as someone who has a very small prospect of owning a home in Northern Virginia unless I get married,” Merlene said in her opening remarks, “when I think about the future, our environment comes to mind. Have we taken the action needed to put us on a sustainable path forward? Do we have leadership in Richmond willing to stand up to Dominion?”

Accusing Favola of conflicts of interest and calling to ban political contributions from Dominion Energy — which has contributed $9,500 to Favola’s campaigns — have been some of the more vocal talking points from Merlene’s campaign.

But an anonymous Twitter account called Virginia Political Memes attacked Merlene over the comments and derided the candidate’s financial status as a “poor personal decision.”

.@NicoleMerleneVA's remarks on why she's running (is a renter, can't afford a house in NOVA, paid out of state tution, etc.) sound more like poor personal decision making than a platform. I mean she says she can't afford a car–how is she going to get to Richmond? #VApolitics https://t.co/7y5gBtqN3E

Merlene responded with a three-part video series laying out the candidate’s positions on transit, affordability in Arlington, and renters rights:

One of the most fundamental parts of being a Democrat is that no matter your socioeconomic status, your religion, your gender identity, your race — is that you’re provided an opportunity to succeed and you’re given a level playing field… To write off an entire segment of our population as “poor” because they have to rent or because they have to use public transportation is despicable.

I have a platform prioritizing transportation & affordability bc these are some of the regions biggest challenges. It is what we are talking about in every debate bc it resonates and is finally being brought as a priority. Jeering on trolls making fun of my income isnt leadership pic.twitter.com/IuM6KNBsUM

Favola waded into the fight as well and said that Merlene “should take her own advice” when it comes to elevating the political discussion.

I’m very proud of the positive pragmatic and progressive campaign I’ve run and my over twenty years of public service. Maybe @NicoleMerleneVA should take her own advice.

The argument escalated to threats of a physical confrontation from Merlene’s brother — a threat lampooned in the responses — for which Merlene took to Twitter to apologize.

I apologize, this should have never happened. pic.twitter.com/9caeYBGgZZ