Sponsored by Monday Properties and written by ARLnow.com, Startup Monday is a weekly column that profiles Arlington-based startups and their founders, plus other local technology happenings. The Ground Floor, Monday’s office space for young companies in Rosslyn, is now open. The Metro-accessible space features a 5,000-square-foot common area that includes a kitchen, lounge area, collaborative meeting spaces, and a stage for formal presentation

(Update 1:25 p.m.) Commonwealth Joe Coffee Roasters (CWJ) has a shop in Pentagon City, but the company has its eyes set on bringing cold brew to vending machines nationwide.

The coffee shop opened in 2012, but the company pivoted toward delivering office coffee in 2017. The company currently operates the portable machines in D.C., New York, and Philadelphia. 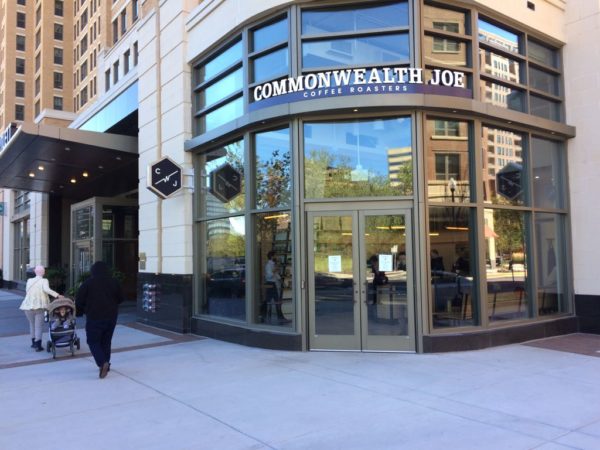 “The $4 million raised in this round will be used to fuel CWJ’s continued growth in vending, as the tech-enabled coffee brand develops closer ties with [KVM] and continues to take a vending-first approach with its coffee program sales strategy,” the company said in a press release. “The KVM is the only one-of-its-kind in the commercial coffee market, essentially acting as a gas pump and only charging the end-user for the amount of liquid dispensed.”

The machines also allow CWJ to track statistics like consumption habits and inventory depletion. The press release noted that some of the funding is planned to go toward including new features like digital payments, automatic reordering, maintenance issue identification and service ticket creation.