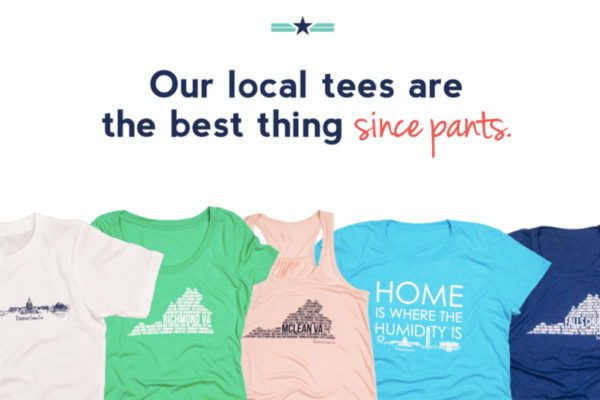 Anyone interested in getting their Arlington t-shirts or D.C. skyline onesies should buy now because local apparel store District Line Co. is going out of business.

The one-woman clothing company based in Cherrydale is planning to shut down by July after the rest of the inventory is sold off.

Lisa McLaughlin, the store’s founder, said as the store passed its five year anniversary in April, she discovered that she’d lost her enthusiasm for the business.

“That surprised me,” McLaughlin told ARLnow. “I looked at stuff coming up, like we were going to need to rebrand or rename, so it was kind of a combination of things but mainly I just realized on a business level that it’s a lot of work to continue growing a brand. You have to have a passion to do that, and I just felt like I wasn’t the right person to do that.”

McLaughlin said one of the early mistakes was not trademarking the company’s name, so she was in conflict with similarly named companies and often received reviews meant for the other companies.

“I loved doing business in Arlington,” McLaughlin said. “When I started this company we made about four shirts and did one event. I didn’t know if anyone was going to get this concept. But people loved their neighborhoods. The Arlington community was very supportive.”

In retrospect, McLaughlin said she would have hired someone to help manage the company.

“I would set it up differently,” McLaughlin said. “I’d have hired at least one person, even if it’s part time, to help with day to day. I’d have spent time on a business plan and think through how will I actually use my hours on what things.”

District Line Co. is currently working on selling off its inventory in a farewell sale. McLaughlin said anyone using the code “farewell25” on the website will receive a 25 percent discount on merchandise.