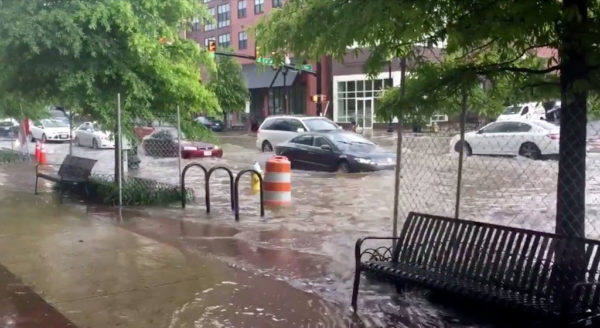 The video (below) was jarring: cars driving through muddy flood waters that nearly reached the tops of tires.

Even more jarring: this was happening along busy Columbia Pike, a route not noted for being flood-prone, during the evening rush hour.

The scene yesterday evening was captured on video by a passerby, showing floodwaters inundating a low-lying section of the Pike near S. Greenbrier Street. As commenters pointed out this morning, driving through flooded roads is a bad idea, but despite repeated reminders to “turn around, don’t drown,” drivers continue willfully operating their vehicles as if they were hovercraft.

(A spokesman with Arlington’s Dept. of Environmental Services tells ARLnow the department is still investigating the flooding and “looking into whether there were any construction-related obstructions in the storm sewer inlets.”)

Residents are reminded to:

Those tips may come in handy tonight. A Flash Flood Watch is set to take effect at 2 p.m. From the National Weather Service:

The video from last night’s flooding is below.