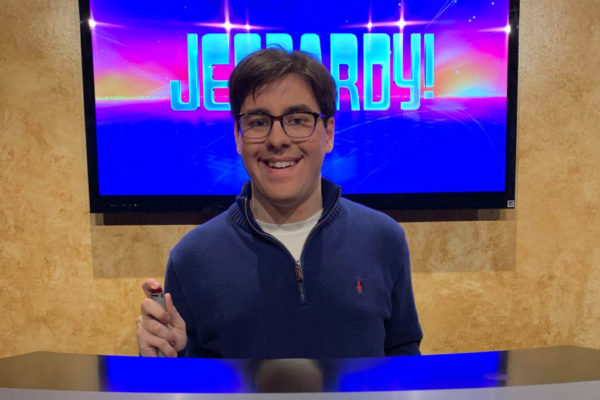 If you tune in to Jeopardy! on Wednesday, July 17, you’ll have a local to root for.

Roey Hadar, a 23-year-old journalist at WETA-TV, represented Arlington during the game show taping in March, though the episode won’t premiere until next month.

Hadar couldn’t say anything about his clues or the results of the game — you’ll just have to see for yourself.

“I had tried out a few times before I got the call, and even then it took roughly two years to get to the point where they called me back,” Hadar said. “I was outside Navy Yard Metro station. It wasn’t a call I was expecting. My girlfriend was there with me, and right before she called the Uber I got the call from L.A. I know my spam calls well, so I picked up and on the other line was a contestant coordinator.”

It had been over 18 months since — the tail end of when you can usually expect to hear back if you got onto Jeopardy! after an audition — and Hadar hadn’t heard anything. And when Hadar said he’d heard about Alex Trebek’s cancer diagnosis, he was worried if he did get to play it wouldn’t be without the legendary host at the helm. Hadar was preparing to take the online test again when the call came in.

The coordinator ran Hadar through some biographical changes. There had been quite a few changes since he first took the test online in April 2017. He moved from New Jersey to Ballston, for one, and he’d gone from a student to working at the WETA show Washington Week.

Because Hadar worked for a TV station, he had to check with his office to see if it would be all right to go, but Hadar said his boss was insistent that he go be on the show. He had two weeks notice, so Hadar binge-watched the show, standing in front of the TV with a spotlight on his face and pressing down on a spring-loaded toilet paper holder to try and get the answers before the contestants.

Hadar said the TV production aspect of the show wasn’t a shock because of his work experience, and years of quiz bowl in high school and at Georgetown University prepared him for handling the buzzer, but seeing the game show from another angle was the biggest surprise.

“It felt like the game had come to life around me,” Hadar said. “It was surreal being up there and actually having to call out clues and facing the wrong way — seeing the board and set in a certain way — there was a bit of a shock seeing everything in a reverse angle.”

Despite being a competition, Hadar said everyone from the staff to the other contestants were incredibly friendly.

After getting home from the show, Hadar said he thought he’d have Jeopardy! fatigue, but instead he’s found himself locked in — watching the rise of fall of James Holzhauer in the time between his show taping and the air date.

“I always had a great respect for contestants, but now I feel like I can better put myself in their shoes,” Hadar said. “I can see how when players are stressing or when they’re trying to frantically hit the buzzer but they rang in too early; things that are a little more subtle that you’d know from playing it.”

But that doesn’t stop Hadar from shouting answers at the television like everyone else, he said.