Whether you’ve given up on playing the guitar or just want to try something new, Crystal City-based startup Fret Zealot wants you to give the ukulele a try.

Fret Zealot is a system of LED lights linked with an app to show a new guitar player where to place their fingers to play a song. The business launched six years ago and Fret Zealot is now available in over 600 stores, according to CEO Shaun Masavage.

After the success of the company’s fret zone guitar device and app, Masavage said the company started looking at other instruments on which to apply its technology.

Ukuleles are undergoing something of a revival, with the ukulele market experiencing 10-20 percent growth in recent years. According to Masavage, the company has received a lot of requests to develop a version of Fret Zealot for the ukulele.

“The ukulele is pretty much easier to play, but still has the same barriers to entry,” Masavage said. “If they get our system, whether you’re experienced or a new player, there’s something for everybody. You can take this instrument with a fret zone on it, and it will show you how to play from day one and play in a way that will keep you interested.”

There was just one problem: no one working at Fret Zealot knew how to play a ukulele. Fortunately, they knew where they could acquire technology to teach them how to play the instrument. 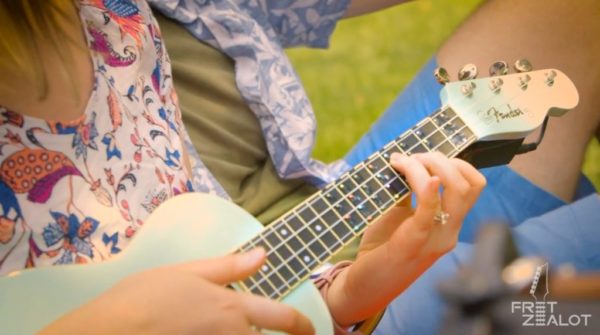 “None of us had learned ukulele, we were learning cords as we went,” Masavage said. “We literally used our own technology to teach us how to play. [We would play] ‘Let it Be’ by The Beatles, which is just four chords. You can’t help but smile while playing it.”

Masavage said his goal is to have the app and the fret zone device for ukuleles ready to go in late August or September. The company is currently a little under $400 short of its $20,000 goal in Kickstarter. The full price of Fret Zealot for the ukulele will be $139.