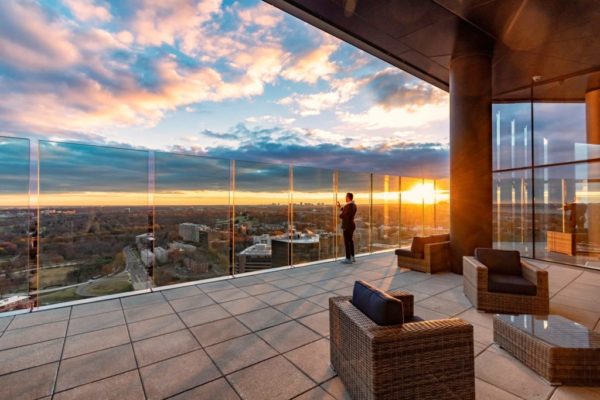 (Updated at 9:45 p.m.) The View of DC, the observation deck on the 31st floor of Central Place Tower in Rosslyn, appears to be closing to ticketed guests.

On the venue’s website, tickets are only available through Friday, July 26. A somewhat cryptic message on the website (below) suggests that the observation deck will “pivot” to being primarily a private event venue.

As we continue to improve operations at The View of DC to offer an elevated and exceptional experience, we have also been carefully evaluating and analyzing our performance for our guests. As a result of that analysis, we will be transitioning The View of DC to serve Arlington County residents and their guests and after-hours events attendees. We believe this will allow us to better serve Arlington County residents and to better leverage The View of DC as a point of civic pride and the go-to event venue in the region.

We will honor all group and advance sales admissions tickets through Friday, July 26, 2019 and pivot to a full-service special event venue immediately thereafter.

Reached be phone today, an employee said staff had not been told the plans but were scheduled to have a 3 p.m. meeting to discuss the changes.

It’s unclear when Arlington residents will be able to access the observation deck after July 26. The county’s site plan for Central Place Tower — formerly known as CEB Tower — specifies that “a minimum of 2 days of every week… as well as the 4th of July, the Observation Deck will be open to Arlington residents free of charge.”

Before the observation deck opened, hopes were high that it would be a major tourism draw for Rosslyn. It is “the tallest destination inside the Beltway that is open to the public — until the Washington Monument reopens,” according to the Washington Business Journal.

While online reviews of The View of DC are largely positive, with praise for the venue’s staff and the views, complaints abound about the price of admission. For non-Arlington residents, tickets are up to $22.

When the tower, part of the Central Place development next to the Rosslyn Metro station, was first approved in 2007, the developer envisioned a more modest admission fee.

Legends, the hospitality company behind One World Observatory at the World Trade Center in New York City and OUE Skyspace in Los Angeles, manages The View of DC, which also features various exhibits and a rooftop Champagne bar.

Photo via View of DC/Facebook