Mechaniku is built on a simple frustration: no one likes waiting for their car to get worked on. So Mechaniku will work with users to have a mechanic sent out to change their oil.

The company is based along Columbia Pike, where co-founders Jesse Tyler and Clifton Hartsuff live.

“In a society fast becoming overtaken by technology I am shocked this is not already a common service provided in every city,” Tyler said. “We live in a world of convenience and I believe people will pay for this service because it ultimately makes lives easier. It takes a time-consuming and aggravating practice and simplifies it.”

The company currently only has one service: a full synthetic oil change in 30 minutes for $100. It’s a little pricey as far as oil changes go, which average a little under $50. But Tyler said the convenience is part of the cost.

“It’s about the convenience of having someone come to your home,” Tyler said. “We did one for a guy here on Columbia Pike… he said ‘I’ll pay $150 if it means I don’t have to get out of my pajamas and go sit in a line on Sunday morning.'” 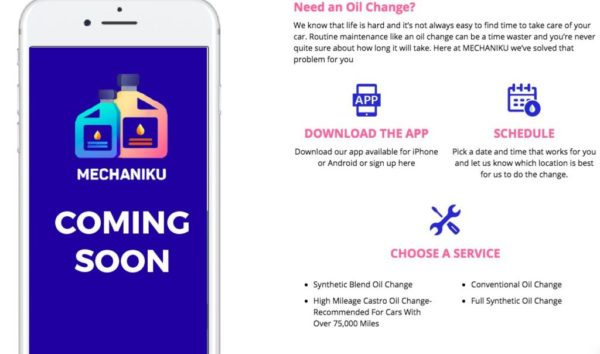 Tyler said half of the $100 goes to the mechanic, while the other half goes to the company. The goal, Tyler said, is to connect qualified mechanics with freelance jobs to help make some money on the side.

In the future, Tyler said the company could expand to tire rotation and other light car maintenance jobs, but he’s in no rush to grow.

“I think several of the groups on the market with a similar model have made the mistake of trying to do everything instead of focusing on doing a service well and what they end up doing by trying to do everything is not doing a very good job of anything,” Tyler said. “We seek to be the best at offering on demand oil changes to our customers with the ultimate goal of providing excellent service and giving them time back.”

Tyler said the pricing and types of oil changes could also change over time as the company continues to refine its business model. The company’s app is currently available on Android and Tyler said the company is working to get it onto the Apple App Store on iOS.

“My father always told me not to reinvent the wheel,” said Tyler. “So we’ve taken an existing business and improved on it.”