Over $77,000 has been raised in a GoFundMe campaign to support Westover retailers damaged by a flash flood earlier this month.

The first $70,000 collected for the campaign is planned to be released sometime this week, according to the GoFundMe page, with Ayers set to receive 41 percent of the proceeds while Westover Market and Beer Garden (5863 Washington Blvd) will receive 35 percent of the proceeds. The two businesses were the most heavily hit by the flooding.

Additionally, the Forest Inn is planned to receive 15 percent of the proceeds, while Grand Hunan Restaurant, Blue Groove Soundz, and Pete’s Barbershop will all receive 3 percent.

The GoFundMe page pledged that 100 percent of funds collected will be delivered directly to the merchants by cashier’s checks drawn on a Wells Fargo donation account.

On the surface, business as usual has resumed in the stores on the north side of the 5800 block of Washington Blvd. But all of the stores faced days without sales, and some are still dealing with the damages invisible from the street.

An employee at Ayers Variety & Hardware said the staff is still working to clear away flood-damaged items from the store’s basement, which held all of the store’s stock and was filled to the ceiling with water. Behind the store, rows of ruined merchandise are stacked near the trash disposal.

Kristy Peterkin, a manager at Ayers Variety & Hardware, estimated the storm caused at least $100,000 in damages to their merchandise.

Staff at Pete’s Barbershop said the store was without power — and without business — for five days.

The campaign is scheduled to end in August. 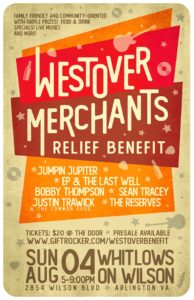 Meanwhile, a fundraiser for the Westover merchants is planned for 5-9 p.m. on Sunday, Aug. 4 at Whitlow’s on Wilson (2854 Wilson Blvd) in Clarendon, according to manager Jon Williams.

Tickets to the Whitlow’s event are $20 at the door. Raffle prizes, food and drink specials, and live music planned for the occasion.

A separate GoFundMe campaign is also underway to benefit the Westover residents affected by the flash flood emergency. That campaign has raised just over $16,000.

A fundraiser for the Westover residents is planned this coming Friday, Aug. 2, from 6-9 p.m. at the Westover Market and Beer Garden. The event will feature live music and a tap takeover by Founders Brewing.