Press Club
Search
News
Brad Garmon is hoping to bring his bee business to Arlington
Raw pollen Brad Garmon collected from the bees is sticky sweet with a pleasant, chalky feel
Beekeepers use smoke to calm bees while opening up the hives
Bees can pollinate plants miles away from their hives, helping fruits, vegetables, and flowers
Garmon’s Italian honey bees seal their hives with a sticky resin that requires tools to crack through
Brad hopes to relocate all 25 of his hives to Arlington within the next year
Brad Garmon’s five backyard hives yielded 100 pounds of honey last year
Brad Garmon says honey yields from urban bees is greater, and the bees live longer, because urban areas have more diverse crops and fewer pesticides than rural ones
Gardens are dotted throughout Arlington, including at the Central Library where vegetables are grown for AFAC’s food bank
AFAC is experimenting using the compost in its organic garden on S. Walter Reed Drive which grows several types of vegetables
Vegetables are donated from gardens straight to AFAC
Previous Image 1/11 Next Image

An urban farming movement growing across the country already is “booming” here in Arlington, supporters say.

“There is absolutely a boom,” said Rebecca Carpenter, founder of Arlington startup Sprout which installs backyard gardens and trains people in how to grow their own produce. “I feel like it is everywhere across the country but I feel it more so in Arlington because folks here are pretty health conscious, progressive.”

Crops can be grown in urban environments in several ways, including rooftop gardens, vertical farms, and green walls. In Arlington, officials say community gardens are one of the most popular methods.

There are 379 Arlington residents who grow fruits, vegetables, or flowers in community gardens, and another 628 on waiting lists, according to Urban Agriculture Coordinator Kim Haun of the county’s parks department. That’s after the county added space for 150 more gardeners over the last three years.

“More and more people are realizing the benefits of urban farming,” said Haun. “It creates a sense of belonging, just check out a community garden on a weekend, the gardeners are family.”

Officials told ARLnow that a combination of demographics and development opportunity make the county fertile soil — so to speak — for community gardens, and green roofs. And beekeeper Brad Garmon said these same resources made the county an ideal home for bee businesses. Either way, everyone who spoke with ARLnow reported increases in the number of people seeking agricultural training and resources.

“I would say it’s definitely been an increased interest. We’ve witnessed our membership levels increase substantially over the past year,” said Matt McKinstry, a board member of the Arlington-based Friends of Urban Agriculture (FOUA.) He said 100 new people joined the organization last year, bringing membership totals to around 500.

“Millennials, the 20 and 30 somethings, are becoming aware of food production and the effects of industrialized agriculture,” said McKinstry. “And they’re curious to understand where their food comes from and how they can both support their local economy and as well as find healthier food options.”

According to program leader Kirsten Conrad, there are 230 people in Arlington certified with the Virginia Cooperative Extension Master Gardener Program — up from the usual cohort of about 200 people.

“I think there’s a much better understanding of the value of the native plants and supporting our birds and insects,” said Conrad of the changes in recent years.

Community gardens in Arlington have blossomed over the past decade: from the Glebe Community Garden, which is assessable for gardeners with disabilities, to the Walter Reed Garden, which is tended by senior citizens and teenagers, to the Reevesland Learning Garden, which teaches Ashlawn Elementary students about growing lettuce.

Haun with DPR said there is no data on the number of private homeowners or businesses who have their own plots, but the county is aware of 57 private plots throughout Arlington that people use to farm crops for the Arlington Food Assistance Center, which collected almost 100,000 pounds worth of locally grown fresh produce for its food bank.

Carpenter says people are also growing produce in their backyard — and increasingly, in their front yard too.

“If you do want to grow edibles you do have to get strategic about where you want to plant them,” she said. “And the front lawn is usually the best place to do that.”

This is because front lawns typically have more sun, are flat, and have easy access to a hose. Still some challenges remain: mature trees can make some yards too shady to grow crops, and hungry deer can cause conflicts.

While growing plants in one’s yard is perfectly permissible, a movement earlier this decade to spur the growth of another form of urban agriculture in Arlington came up short: proposals to allow backyard hen raising in more Arlington yards were largely shot down.

The backyard hen issue was taken up by an Urban Agriculture Task Force, led by John Vihstadt before he was elected to the County Board, and which later formed FOUA. Despite the hen proposal stalling, some of the task force’s short-term recommendations, presented to the Board in 2013, have since been implemented, including:

One company looking to take advantage of all the buzz around native plants and insects is Charlottesville-based Commonwealth Bee Co.

He’s moving his 25 beehives into Arlington and hopes people will contract his company to set them up on rooftops or backyards where he can do the maintenance and they can reap the benefits of pollinated plants (and maybe some honey.)

Currently, nine of Garmon’s hives are in Arlington, with five sitting in his own backyard near Arlington Forest. He says no one — including his 3-year-old twins — have been stung, and when ARLnow visited last week, the bees remained docile as the cameras got within touching distance of the hive. 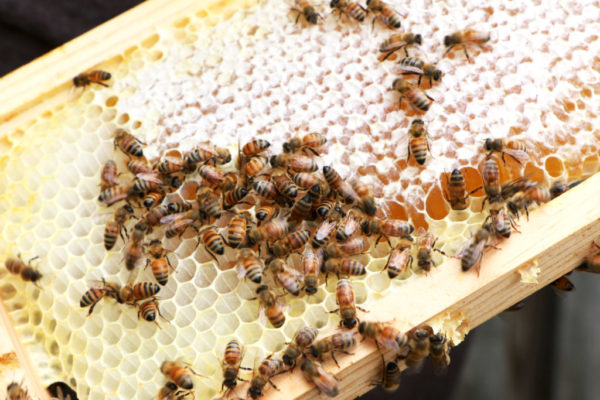 Together, Garmon’s backyard hives are home to over 150,000 Italian honey bees, which can travel for miles to find pollen.

Garmon said now that rural farming is often based on single crops, the lack of crop diversity and reliance on pesticides often hurts bees. Because of this, he says urban bees are often healthier and live longer because they have access to a variety of pollen sources and get exposed to fewer pesticides. And hives on rooftops help avoid the pests that live in the cool, moist dirt.

Currently, his backyard hives currently produce around 100 pounds of honey a year.

“I’ve got hives in the middle of nowhere that do not produce as much as these guys,” he said.

Garmon is looking to partner with developers and office buildings in Arlington to spread his hives, and other urban agriculture enthusiasts are exploring similar strategies.

Currently, Haun said six county buildings have green roofs, including the Walter Reed Community Center, but there’s no data on how many private buildings — like Ten at Clarendon and its herb and vegetable garden — have one.

Green roofs have been shown to lower HVAC costs by helping keep buildings cool, and also reduce stormwater runoff by acting as a pervious surface able to soak up rainwater.

“If we were able to have more rooftop gardens that would have dissipated some of the stormwater runoff,” McKinstry said of the damaging and unusually strong July floods. “It would have trapped that water on roofs rather than overflowing our sewer systems.”

Another business prospect for would-be Arlington farmers is Amazon’s planned HQ2 in Pentagon City, the first phase of which will feature two office towers with a central park.

Garmon hopes the 2.1 million square foot development could mean space for a hive or two, and McKinstry said he hoped the daycare Amazon may build could be a great incentive for a nearby garden.

“It would be wonderful to see a teaching garden that works with kids that offers employees as well as the public to enjoy fresh grown, fresh off the vine fruits and vegetables,” McKinstry said.

Carpenter said if the company and the county invests in urban agriculture, it would be a major selling point for employees looking for Arlington’s fit and healthy lifestyle.

“When Amazon coming in, Arlington is becoming more nationally known,” said Carpenter. “The more you can offer as a county for a positive and healthy lifestyle, the more workers and the more companies want to come here.”

For now, officials and advocates are gearing up for more events to teach locals more about urban agriculture.

The Friends of Urban Agriculture group is hosting a free discussion about best practices learned New York City and the Netherlands on Thursday, October 3. That event will be followed by Garmon’s $20 introductory beekeeping class on Monday, October 7.

The Master Gardeners, meanwhile, are hosting a training series in September, covering everything from cold-weather gardening to landscaping in wet areas. That is in addition to their usual “plant clinics” around the county, during which volunteers solve plant emergencies and answer questions.

And Arlington farmers markets, which celebrated their 40th anniversary this year, will literally be put on a map thanks to a new state initiative.

“I like to think that we’re getting back to our roots,” said Carpenter, of the urban ag movement. “We’re releasing how to grow and eat real healthy and whole plant-based foods.”

“Certainly in the early days there were people who would come to me and say ‘I moved to Arlington to get away from farming,'” said Conrad. “I think today that sentiment is much more rare.”

Read more →
More Stories
Progressive Voice: How Do We Make Real Progress After the Northam Incident?JUST IN: Severe Thunderstorm Warning Issued for Part of Arlington